Today was an interesting day. We came across the bottlenose dolphins feeding towards the south of the lagoon, then later a different subgroup further north and then at the end of the day when we came in, we found them again, in the yacht basin right where we launch the boat! The feeding is interesting to watch as the dolphins do a lot of dashing back and forth and surface-rushing to chase fish. Whenever we have seen dolphins feeding so far there have also been young seals feeding alongside, although usually in a tighter cluster, and with more fish leaping out in front of them. They're very difficult to photograph when they're feeding and it takes a lot of patience to get the ID shots we need, although it's great now that we're starting to identify individuals by eye. While looking through the photos of the day just now, I discovered one animal with a very deep scratch which we hadn't noticed while at sea (see photo). 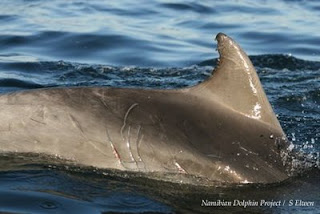 The Heaviside's were almost absent from the point today for the first time, with only a handful sighted. But the big excitement of the day was that killer whales were seen by one of the tour boats. After all the boats had had a look at them, we managed to grab a few ID shots as they were moving offshore. I've cropped in a few and posted them below, along with a shot of a Caspian tern which was feeding alongside the bottlenose 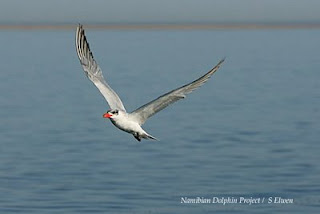 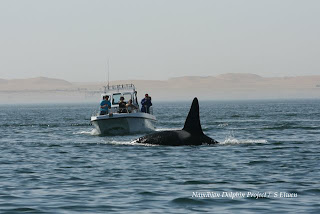 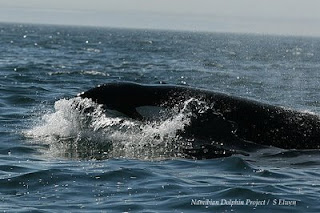 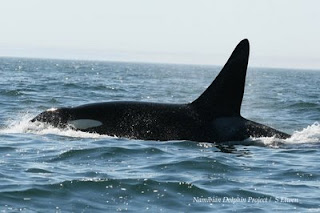 Data collection has been continuing along in the last week and we've been putting together the the bottlenose dolphin catalogue - so far we've identified 38 individuals (although there are some repeats in that as 12 animals were only identified from one side).
Unfortunately, we've been held up slightly by having some engine problems with the boat, which Ingo has been great about getting sorted out - thanks so much for that. We've used the opportunity to get on some of the tour boats to collect some opportunistic photographs. Thanks to Levo Tours and Mola Mola for hosting us. While on Levo's Antie, Ruth and Joaquina came across these 2 humpback whales near Pelican Point, which were rather popular with the tour boats. 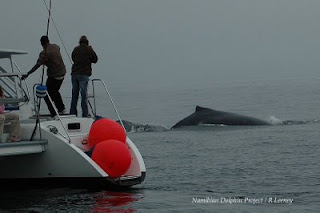 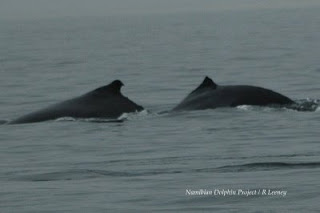 Posted by Namibian Dolphin Project at 22:03 No comments:

Data collection is now progressing well and we've had 6 dedicated research trips on Pedro already. We've encountered Heavside's dolphins (or Benguela dolphins as many people call them here) on all of those and bottlenose on 4 of them (with some re-sightings already). However, all encounters are not equal and some days the Heaviside's dolphins can be very difficult to approach for photography.

We're trying to stay on top of the data processing by grading our images for quality and picking out the distinctive animals as we go. Only good quality photographs of well marked animals will be used in the mark-recapture calculations. This means fins need to be well focused, close up, and perpendicular to the camera to minimise the chances of mis-identifying any animals. I've put a few example photographs below of the types of natural-marks we use to identify animals. The bits of missing fin are mainly the result of interactions with other animals, they never heal and can be used to identify individuals for many years (if they don't get disguised by the addition of too many more marks!). These images are not all of a good enough quality for abundance estimates - but I've included a few of the very well marked ones we've seen in the last week, just to show that they're out there. As you can see, the Heaviside's (left column) are not nearly as well marked as some of the bottlenose fins (right column). (For scale - the Heaviside's fins are actually much smaller than those of the bottlenose). 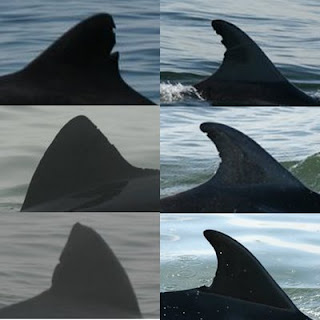 Posted by Namibian Dolphin Project at 08:42 No comments:

Went out to the Point today in the hope of surveying to the south when the mist lifted but it only lifted quite late so we just stuck around and worked the Heaviside's for several hours. They were being particularly frustrating today, diving whenever we got near them, hardly ever coming close to the boat, changing direction and splitting up all the time. On a positive note - there were a few nicely marked ones out there which was gratifying as the first few I'd photographed from the Mola Mola tour boats all had perfectly clean identical fins. The dolphins seem to wake up at about 10am when the tour boats arrive and the sun comes out and a few were leaping about.

Marko on Silverwind spotted a young humpback whale just off the point and after the tour boats left for home we followed it for a while and got a few ID shots for our colleagues working on the species in Angola, Gabon and South Africa. 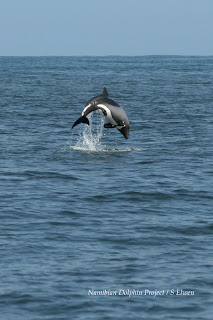 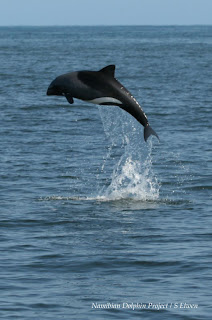 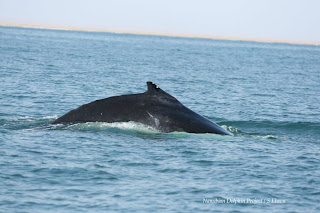 Posted by Namibian Dolphin Project at 19:40 No comments:

Tuesday was a fantastically sunny calm day and we took Pedro for a survey most of the way to Swakopmund before hitting mist and turning back to the point. After working with a few evasive Heaviside's, we encountered a great group of bottlenose dolphins which the tour boats had spotted. 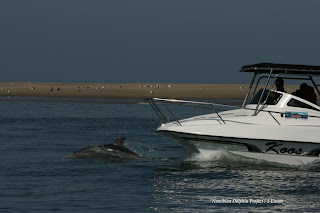 The majority of the time, the dolphins were in very close to shore and appeared to be feeding, with lots of chasing up and down the shore line with occasional small fish jumping. The seals were also getting in on the act and there were always a few with or very close to the dolphins chasing things about just under the surface. 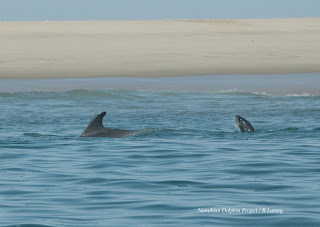 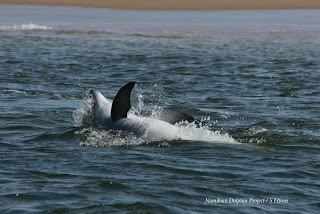 Interestingly, there were frequently Heaviside's dolphins nearby - they didn't exhibit anything that was obvious feeding behaviour, and the two species just seemed to ignore each other.

The dolphins were amazingly close to the shore - I kept expecting them to strand themselves on the beach chasing the fish, but they never did. Apparently this is quite common behaviour for them around here in the areas were there is little wave action. 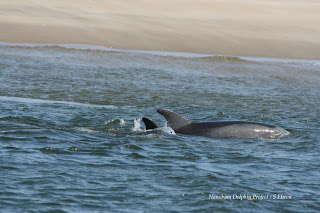 Posted by Namibian Dolphin Project at 19:10 No comments:

The ball is rolling! Ruth arrived on Thursday and Joaquina on Friday and we got almost straight out to sea. We tried one of the smaller boats from NDMS on Saturday but it was unfortunately a little too small for the type of work we are trying to do and the areas we need to visit outside the bay, so it was a rather short day but Sunday was more successful..

Ingo, of Pelican Charters has generously offered us the use of his ex-tour boat Pedro, which is fairly large and very safe and a great option for us at the moment. Sunday we took Pedro for our first full working day as a team and spent several hours with the Heaviside's at the Point. Unfortunately, they were being rather shy and the misty weather didn't help with photography, but that's the nature of the work. We narrowly missed finding the bottlenose dolphins but hope to get them next trip. All in all, it was great being out there and tomorrow we're out again. The only downside of working on Pedro is that the seals kept jumping aboard expecting to be fed. It's a strange feeling trying to work with a 350kg bull fur seal standing behind you watching you work. We're hoping they'll eventually dehabituate to this particular boat as they seem pretty well tuned as to the difference between the tour boats.

We're still going out on the tour boats in between research trips to gather data on their movements in the area and interactions with animals in the bay. Thanks to Marko of Catamaran Charters who took out Ruth and Joaquina today while I spent the day standing in queues at the Traffic department dealing with the necessary bureaucracy involved with buying an old Golf to run us around town. Ruth managed to get some nice photos of Heaviside's bowriding Silverwind today. 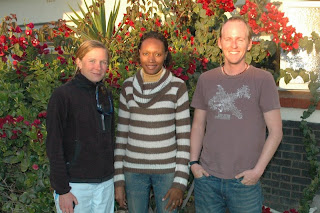 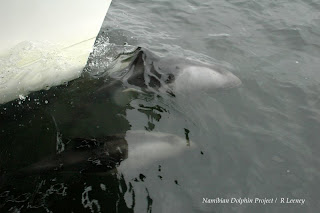 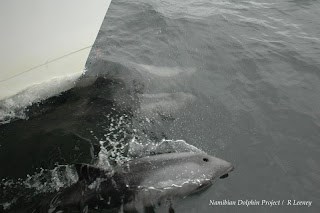 Went out on one of the Mola Mola boats again today (thanks Neels and Megan) to try get a few bottlenose photos and they have been seen in the bay recently. It was a beautiful day, sunny and calm and we found them just north of town and I managed to get a good few ID's from them. Also nabbed a few pelican and skua shots while out there. The Heaviside's at the point were also behaving and I managed to get a few good shots of them, including a few marked individuals which is great for the beginning of the catalogue. Ruth arrives tomorrow and Joaquina on Friday so if the boat is ready we'll be out there on the weekend and data collection starts full time.
For more photos, look at : http://picasaweb.google.com/simonelwenwork/Namibia2008 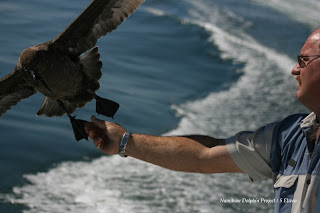 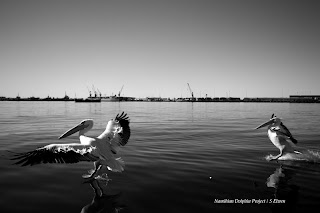 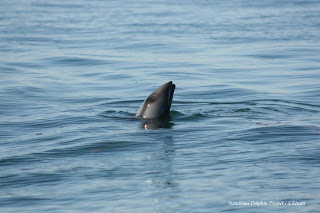 The project really needs a vehicle to move us and the boats around town and I've been following a few leads and putting forward some proposals in this regard. If you know anyone who can help, please get in touch.

Another big thank you to Alan Louw, Flossie Janse van Rensburg and Andries Prinsloo of Namib Diving and Marine for their help in getting us a boat.
Posted by Namibian Dolphin Project at 17:09 No comments:

Managed to get our own boat out to sea at last. Namib Diving and Marine Services (NDMS) have been really supportive of the project and have been trying to find boats that are both suitable and fuel efficient. We took their aluminium demo boat for a run on Sunday to see if it was right for us (it has rear tiller-arm steering, I'd normally prefer a boat with a centre console that you can drive standing up to make searching and dealing with surf conditions easier). However it turned out to be a great stable design that is easy to stand in for both searching and photography and quite fuel efficient too.

Ran up the coast away and then out to the point where we encountered some Heaviside's dolphins and a group of bottlenose.
Unfortunately, the bottlenose were bow riding a tour boat away from us and I didn't want to chase them. Working around the tour boats is going to be a real challenge for us in the coming months. 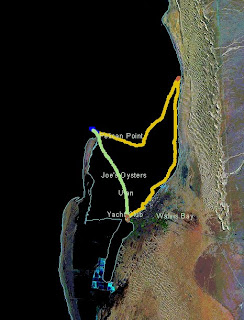 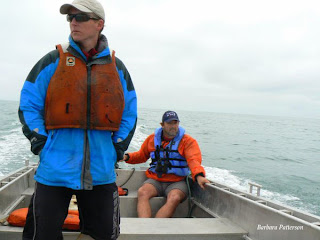