In early July this year, we put a CPOD hydrophone down at Sandwich Harbour – the goal being to investigate how frequently bottlenose dolphins go into the lagoon there, compared to Walvis Bay where there are far more human impacts.  However, it’s a really challenging environment to put in a mooring for this type of instrument, as it’s very shallow, with a sandy bottom and lots of tidal movement.

Two weeks ago when we went back to recover the instrument (a mighty trip in it’s own right – taking 8 hours on the boat and >80L of fuel to cover the ~150km there and back) we discovered the buoy barely peeping above the surface. Over the 2.5 months that we left it down there, the entire mooring had become buried by the flood of sand that is moved every day by the tides. The power of Nanuuq’s 120 horsesbarely managed to pull the rope free, but couldn’t move even a centimeter of the weight or its blanket of sand, no matter what direction, no matter how tight the ropes were. Nanuuq had to surrender to the power of nature.

Mission impossible – Plan B. After much deliberation, we decided that the best way to rescue the CPOD was to drive to Sandwich Harbour along the beach as close as possible to the mooring, and to carry and small boat and diving equipment to dive it out. So last Friday, we (Simon, Nico and I) set off on our ‘mission impossible’ with the precious collaboration of Gert and Andries from Namib Diving and Marine Services.

Two 4x4 cars carrying all the proper equipment and a 4 m aluminum outboard with a 30 Hp engine left Walvis Bay towards the stunning dunes of Sandwich Harbor. Once there, surrounded by hundreds of birds and a couple of lazy seals, we quickly arranged our short sailing trip to the buoy to complete the mission as soon as possible in order to come back before the high tide would have obliterated any trace of the road we drove in on. Unfortunately, once on board we found out that the engine didn’t work properly (40km of bouncy beach driving isn’t great for engines it seems) and had to row all the way to the buoy. Simon dove and Nico snorkeled above him while Gert and Andries remained on board as support. In less than 5 minutes the rope was cut and the barnacle encrusted CPod was set free.

We were very happy to succeed in rescuing the CPod but a surprise which made our day even more special was about to come: on the way back to Walvis Bay, a group of at least 20 bottlenoses was slowly swimming (and maybe feeding) along shore, so close to the beach that we could have touched them if we had wished to. We grabbed the cameras and took as many photos as possible as there were many marked animals as well as moms and calves. The tide was arising fast and we had to go back very pleased for completing the C-Pod mission and to have had a further chance to meet dolphins from land…
Aurora :) 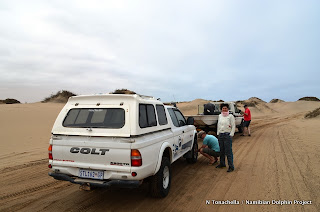 LETTING THE TYRES DOWN AT THE OLD SA-NAMIBIA BORDER 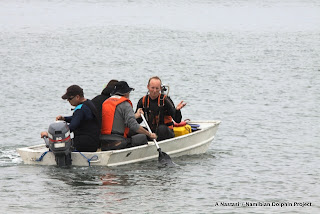 BOAT LOOKS SMALLER THAT IT WAS! 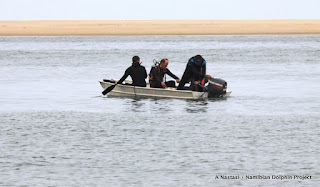 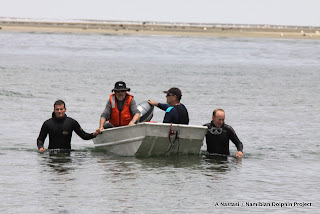 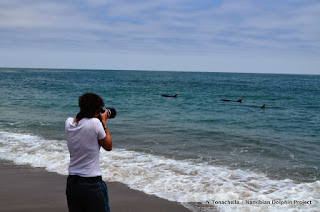 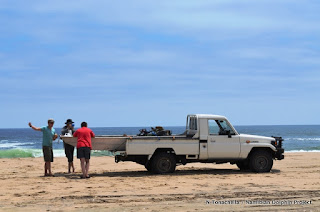