With the hydrophones eventually in hand it has been out primary goal in the last few weeks to get them out to sea. We are happy to announce that they have now been successfully deployed in both Walvis Bay and Luderitz. In Walvis they are deployed at Pelican Point, to investigate Heaviside's dolphin habitat use, and near Aprhodite beach on the east side of the bay where the bottlenose dolphins are frequently seen to rest.

Although we towed Nanuuq all the way through the desert (see pic) from Walvis to Luderitz, the wheel bearings couldn't deal with the dust and we had to leave the boat in Aus (100km from the sea at 1600m altitude!!) for more than week while the problem was sorted out! Luckily we still managed to get the hydrophones deployed in two known Heaviside's hotspots at Shearwater and Guano Bays. We couldn't have done this without the phenomenally generous help of Heiko Metzger of Zeepard tours (see pic) and the knowledge and support of the local Ministry of Fisheries and Marine Resources scientists, especially Jean-Paul Roux.

Although we're naturally somewhat nervous about the moorings being pulled up, dredged, trawled, entangled in propellers or washed out to sea, we're quite excited about getting the data back from them in a few months time! 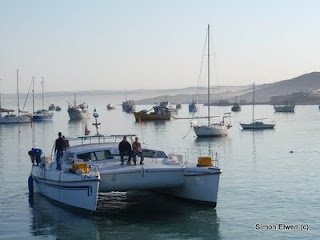 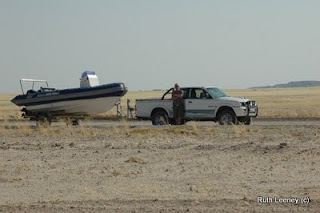 Posted by Namibian Dolphin Project at 17:28 No comments: