Landing at Walvis Bay airport, my first thought was "what have I done?” The airport was little more than a tent, and everywhere I looked there was sand, and nothing else. I was thankful to find that Walvis Bay was in fact a city with actual houses. The community is a small one, and it wasn’t long before I'd met the entire population of the waterfront. This tight knit community feel is what gives the town its charm, and what makes the program redeeming. As a part of a small team, you are not only guaranteed to make close connections with your fellow interns and staff members, but also to have real responsibilities and be an integral part of the team. The data we collected and entered will all be put to use by the project (after quite a bit of mistake fixing I'm sure), and on the boat everyone has responsibilities and jobs to do.

Boat days were the highlight of the research. We had the opportunity to spend plenty of time with the animals; watching the adorable Heaviside’s dolphins swim within inches of the boat, witnessing bottlenose dolphin feeding frenzies and following humpback whales for biopsy samples.

This internship gave me a great insight into the life of a marine researcher. I learned things I didn't expect to, like how to prep, launch and drive a boat, how to use a crossbow and a hydrophone, and how to put a battery on to charge properly (something we all struggle with... right?). I am thankful for the opportunity to be a part of this important project as well as to spend a month in one of the most beautiful countries on the planet! 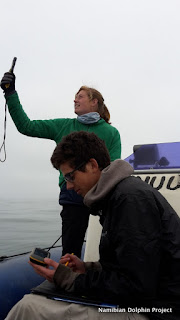 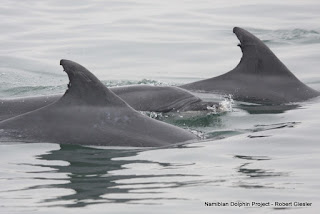 From forests to deserts- The Namibian experience

By Lauren Melchionda, Intern with the NDP Aug 2015

I love trees. I love stratified bark, whorled branches, and long taproots.  Most of the biology that I took part of in my undergraduate career happened in the Vermont forests.  My woodsy scientific upbringing instilled in me a passion for conservation and the environment.  As I approached the end of my third year in college, I sought out internships to gain more experience working in the natural world.  The Namibian Dolphin Project Internship leapt out at me as an opportunity to study new creatures in a totally different environment.  I applied, was accepted, and a few months later I found myself on a plane to Namibia!

Namibia could not have been more unfamiliar to me. There was sand instead of soil and rather than studying plants, I was studying marine mammals.  There was definitely a learning curve.  Dolphins are harder to find and much harder to photograph than conifers and angiosperms.  Despite the adjustment, working with these animals was a life changing experience. Our boat, The Nannuuq, was very small so I really felt like I was a part of the cetaceans’ habitat.  I got to see humpback whales, bottlenose and Heaviside’s dolphins, seals and penguins, all while working! I grew particularly fond of the Heaviside’s dolphins which swim and play right along the side of the boat!

Working with The NDP equipped me with many useful skills. I learned all about cetaceans, data collection and entry, and working on a boat.  This was also a great opportunity to learn about the Namibian culture, a place I previously knew nothing about. I got to work with people from all over the world and the diversity in all of our homes, educations, and interests made the summer extremely enriching.  Working with cetaceans and with all of the different biologists made me realize that even though we study different subjects and come from faraway places, our love for science and passion for conservation is universal. 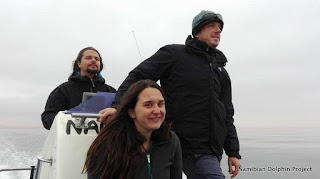 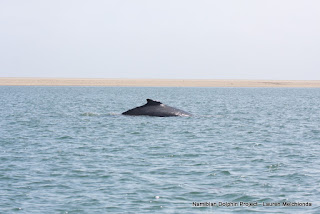 PHOTO OF A HUMPBACK WHALE BY LAUREN MELCHIONDA
Posted by Namibian Dolphin Project at 11:07 1 comment: