Busy times here. We were out to sea almost everyday last week and had a great run of good dolphins and good weather. Luckily(?) that's turned now and it's been quiet and rather choppy out there the last two days, so we're taking today off to catch up a little. Season is drawing to a close and there's still lots to do and summarise.
The good news - we have twice seen the injured dolphin since the original report a few blog posts ago. He ('it' really as we don't know it's sex) still bowrides the boat, but most importantly is healing amazingly well. If you click on the images it opens a slightly larger version. Compare the two photos below to the open wounds of the original photos. I'm really quite astounded at how well these wounds have healed. 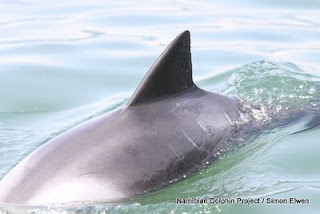 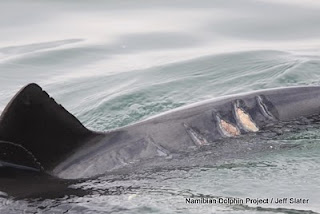 I sent an email around to all the tour operators about this sighting and I think it really brought it home to them that as the people out there every day, the responsibility for the animals lies with them. They have all been really good about not reverse bowriding with the dolphins and letting them determine the space use a little more.
Jeff Slater from Cape Town has joined me up here for the month to help out on the boat with driving and taking photos. Jeff is considering a career in marine biology and I'm doing my best to show him both sides of the coin - the fun side on the water, and the real work which involves sitting behind a computer for hours on end processing data, writing grant applications and updating the blog. I really ought to put up more pictures of empty seas on misty days, freezing cold mornings and dimly lit offices with flickering computer monitors - just to give a more rounded view of what we do out here :) I'd also roped in Edith Mertz, to help me out for a few weeks. Edith is a Master's student of mine who's investigating the interactions between cetaceans and a fin-fish farm that is being developed in Mossel Bay. It's something we also touch on here in Namibia here there are a large number of oyster farms in the bay. Now that we have four seasons of spatial data from Walvis, it's really interesting looking at the variation in habitat use between seasons, and what the implications of that are for coastal development or trying to make restricted or protected areas. Edith's work is described on the site below:
http://www.oceans-research.com/marinescienceprojects/mosselbaycetaceans.html 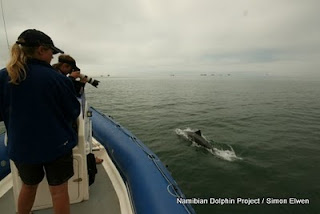 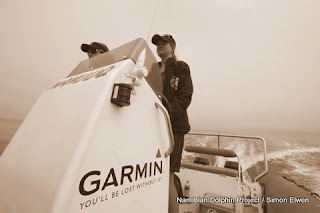 Posted by Namibian Dolphin Project at 07:52 No comments: 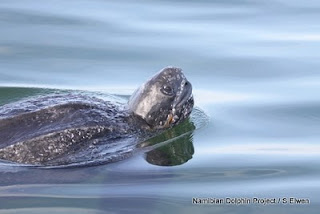 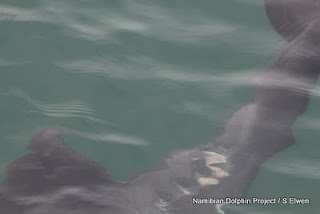 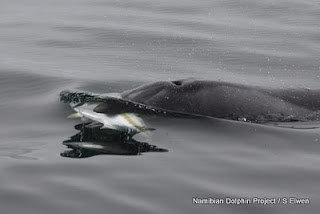 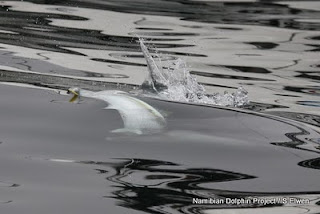 Posted by Namibian Dolphin Project at 15:18 No comments: