Since our trip to the UK where Tess and I had some very productive meetings with colleagues at St Andrews University, it's been a busy few weeks back home.  Not much exciting happening in the way of strandings or sea days in the last month - pretty much just office work, which is good in its way.

Hannah and Tess and making good progress on their analysis of signature whistles in bottlenose dolphins and are close to a first publication draft. I managed to do some work on our humpback whale paper (that went to the IWC earlier this year, to better prepare it for publication and sent it off to co-authors. Sara is going square eyed from looking at hundreds and hundreds of Heaviside's dorsal fins and still has a long way to go.  Two volunteers from Germany and Holland are going to be joining us this week to help Sara with her data processing - we'll introduce them later.

We've also been trying to do a little more public awareness this month while we could: Tess and Sara gave a talk at the Dolphin School, we've had a few more people popping in our our Environmental Office, I gave a talk at the Gobabeb Open day on Walvis Bay's bottlenose dolphin population and also at the BCC (Benguela Current Commission) conference in Windhoek last week. Both of these talks highlighted some of the conservation concerns that cetaceans are facing here in Namibia.  A lot of other interesting talks at both events!

There is a lot of development happening in the marine environment over the next few years including the phosphate mining (even though there is currently a moratorium on it, it's likely to go ahead at some point), a few seismic surveys planned and the massive harbour expansion project taking place in Walvis Bay. Any construction projects or survey activities which potentially impact on the environment must go through an Environmental Impact Assessment process. This almost always involves at least one public meeting to allow for anyone who is interested to attend and get more information on the projects and air their concerns. We do our best to go to any that are relevant to the marine environment along with colleagues from the Conservation and Environment Trust of Namibia (CETN), but these meetings are often not well attended and we strongly encourage everyone who can to take an interest in their environment and go to the meetings!

A lot of people aren't aware of these meetings, so we're going to try advertise the ones we're aware of either here or on Facebook (Namibian Dolphin Project) and also on the window and chalk board at the office. 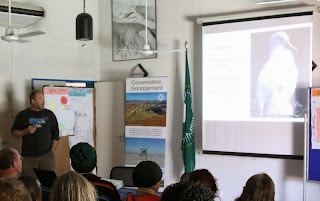 JOHN PATERSON OF THE ALBATROSS TASK FORCE NAMIBIA AT GOBABEB 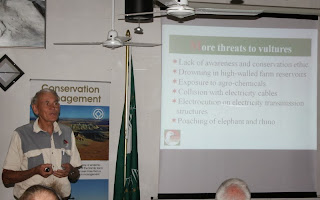 PETER BRIDGEFORD OF VULTURES NAMIBIA AT GOBABEB
Posted by Namibian Dolphin Project at 11:43 No comments: