The surveys begin... by Tess Gridley

After securing the funding, compiling the hydrophone in Scotland (thank you Rene and Ricardo Antunes!), learning to use the software, driving 2000km to Namibia and eventually receiving the hydrophone (after a very frustrating 2 week delay) and bench testing in the lab, we finally embarked on our first survey last Thursday. 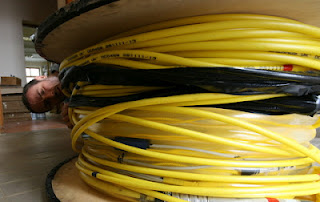 Rene trying to figure our where to beging unravelling the hydrophone:
With nervous anticipation we loaded the 400 meter hydrophone onto our new research vessel the !Anichab and headed out to sea. What they don't tell you in the instruction book is just how long it takes to unravel 400 meters of hydrophone.. ..Thirty minutes and three safety lines later our hydrophone was successfully deployed (along with several peoples breakfasts!) and we were ready to start our acoustic surveys. 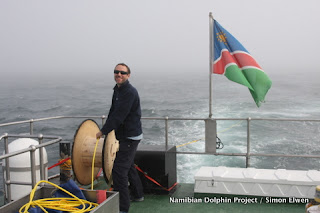 A very happy with Rene, with 400m of fully functioning hydrophon deployed off the back of the !Anichab
At first the weather was pretty good, and the visual team were doing considerably better than the acoustics team at a) spotting dolphins and b) not throwing up.. but after a while, and rather predictably the swell picked up, the mist thickened and acoustic methods were really our only hope of detecting any life out there in the misty Benguela. Though all credit has to go to JP Roux who carried on looking for cetaceans and birds regardless of the < 200 m visibility.
Our survey lines took us out to the shelf edge at a water depth of 200 m +.  On the way out we encountered one lonely Heaviside's dolphin, in 120 meters water depth something which is either rare or rarely reported (only further research will tell.. :-)) . To our surprise, and several shouts from Simon, we also spotted 3 largish baleen whales, from the pictures  we think are likely to be sei whales. Which didnt hangaround for too long and may well have been feeding. Quite an unusual sighting and not what we had expected. 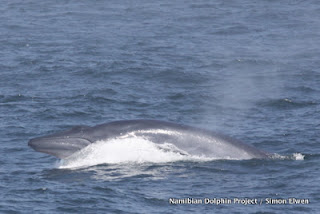 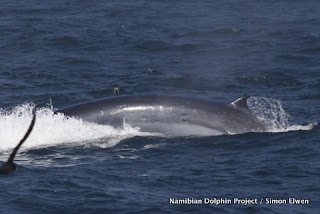 By the end of the survey, we had also detected several Heaviside's dolphins and a large school of dusky dolphins.. Most importantly, the acoustic system was up and running nicely, and detecting animals that were not spotted by our visual observers!
So what next...? This is only the tip of the iceberg.. Surveys will continue to run until June this year and intermittently for the next two years at least. We hope to build up information on Heaviside's and dusky dolphin habitat use patterns, as well as much needed information on a whole range of species out there in the Benguela. We hope that this information can be integrated into conservation and management plans and will hopefully help to protect vulnerable populations of marine top predators.. So watch this space, as we will be regularly updating this blog on the progress of the NIMPA Visual and Acoustic surveys !
Posted by Namibian Dolphin Project at 12:02 No comments:

The NIMPA surveys - Part I

Around this time last year we were granted funds through the Nedbank Go Green Fund to purchase an acoustic array for surveys of the Namibian Islands Marine Protected Area, near Luderitz. This is basically a series of hydrophones (underwater microphones) which are towed behind a research vessel and can detect the naturally occurring sounds produced by whales and dolphins. Using acoustic methods in surveys of marine mammal distribution and relative abundance can greatly increase the chances of detection and optimise survey time and funds.  With the strong winds and swell experienced in southern Namibia, we felt like acoustic methods were the best way to study the area and were thrilled to get the chance to start this work. 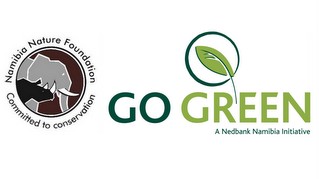 We planned this research in collaboration with Dr JP Roux of the Ministry of Fisheries and Marine Resources and soon after began working with Rene Swift (University of St Andrews Sea Mammal Research Unit, UK) to design the most appropriate hydrophone for our needs and budget.
Through a SCOR visiting fellow grant, Rene was able to visit South African and Namibia to run training in the use of PAMGUARD software which we are using throughout these surveys.  Training in South Africa took place over two days (23-24th Feb) and involved participants from the Uni. Pretoria's Mammal Research Institute, SANBI and Namibian Dolphin Project and was a great success. SANBI (South African National Biodiversity Institute) are using PAMGUARD to study the distribution and abundance of frogs on Table Mountain, showing how useful acoustic methods can be to biologists.

Posted by Namibian Dolphin Project at 11:45 No comments: