When I got off the plane seemingly in the middle of the desert I never dreamed that this barren land would supply some of the best experiences and memories of my life in the space of a few short weeks. On my first full day in Walvis Bay we were blessed with gorgeous weather, so headed out on the boat. The early start was a bit of a shock, but was definitely worth it, when in the space of one morning we had two species of dolphin coming up to us and bow riding! To cap it all off two humpback whales had been spotted – a mother and calf! They surfaced so close to us that I could feel the spray from their blow hole! I thought that things couldn’t possibly get better than that, but I was oh so wrong: in the space of two weeks I’ve travelled north to a national park, where we ventured into the desert to play on sand dunes; seen amazing scenery ranging from ocean to desert to scrub land; been up close to a dead humpback whale (the smell wasn’t nearly as bad as I thought it would be!); had some practise at driving the boat; had a go at some photography; travelled south for two days (with a stopover in the capital); seen loads of wildlife including springbok, orix, seals and a family of warthogs! It’s not all glamour though, some days can be cold on the boats and you can’t be squeamish about getting covered in all sorts, from seawater to barnacle juice, but it has most definitely been worth it, I’ve learnt so much from being here and had a lot of laughs in the process.

At the entrance to the Skeleton Coast National Park: 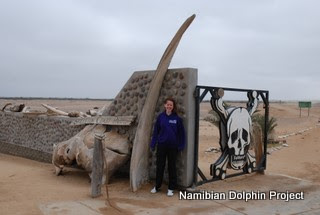 Team photo at the Ugab River mouth in the Park 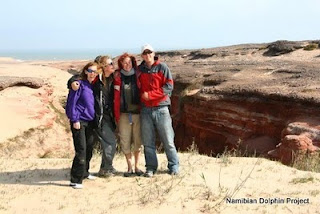 John Paterson (the former head ranger at SKNP and now Albatross Task Force), took us up to a place called Oasis on the edge of the dune field...stunning. 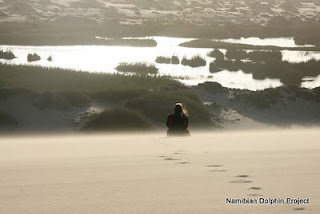 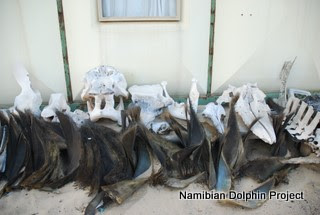 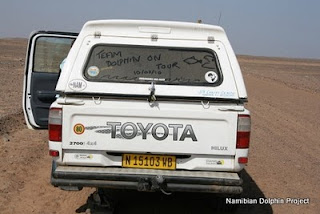 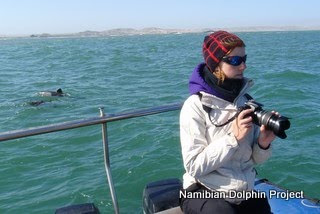 Posted by Namibian Dolphin Project at 17:58 No comments: