On Wednesday the 13th, we had a report from several different people of a live stranded whale up in the Jakkalsputs area (just south of Henties Bay).  The NDP team headed up as fast as we could to assess the situation and see what we could to assist, co-ordinate and collect data.

We arrived to find several people clustered around an adult male sperm whale (which we later measured at 16m long) which was being bashed about by a fairly big surf. Some people had already attempted a rescue before we got there. Not unexpectedly, their attempt was unsuccessful and people had risked their lives and health for what was at best a long shot.  Luckily the EMED team were on hand and no mishaps occurred.

Although we are very grateful for the support and interest of the community in the welfare of this animal and other cetaceans - we strongly recommend that if you find a stranded whale, dolphin or turtle, you contact someone with experience and training before attempting any rescue.
PLEASE SEE CONTACT DETAILS AT THE END OF THIS POST


Some important things to bear in mind with stranded whales and dolphins:

- Most of the time, animals strand due to natural causes such as disease, injury or old age (which aren't always obvious) and refloating them isn't likely to prolong their lives anyway.

- These animals can (and increasingly do) carry diseases that can infect people. People also can transfer diseases to animals.

- Cetaceans are large and extremely strong, even the smallest local animal (the Heaviside's dolphin) weighs about 50-60kg and and adult humpback or right whale weighs 10s of tons. Throw in some heavy seas and big swells and you have a recipe for disaster. Sixty kg's being thrown into you by the force of some pounding swells will knock over at the very least, or a larger animal could very easily roll onto your foot and trap you underneath it. Don't forget that a whale's tail can push it's entire body out of the water when breaching - if it hits a person with that tail while on the beach...

- With respect to the situation of a large animal such as this in big surf - refloated animals often just turn immediately once in the water and swim along shore and then straight back on too land. Bear in mind that these animals have likely never lain on the ground before (and thus experienced gravity as us land mammals do) and this can result in squashed or even crushed internal organs in larger animals (especially their lungs), upset balance and one would image, just general disorientation. Sperm whales are fairly tall and narrow in shape, so tend to lie on their side when stranded, which makes it even harder to move them and probably disorients them even more than other animals. To reduce this disorientation and reduce the risk of restranding, the approach advised by experienced people is to, once back in the water, hold the animal upright at the surface for several minutes up to half an hour to allow it to reorient itself and get its breathing back to normal. Unfortunately, there is no logistical way that a handful of people could get an adult sperm whale 16m long, which weighs in the range of 20-30 TONS and has been lying on it's side on the beach for at least 5 or 6 hours, out through that surf zone and then hold it upright in the water while it gets used to floating again. The best equivalent I can think of is if someone held you upside down by your ankles for 6 hours then turned you upright and told you to immediately run across a busy highway in a straight line, you'd need a little help and time to get used to being upright again.

Great big thanks to everyone who let us know about the animal and helped out with the stranding - especially Martinette Fourie who stayed on until sunset on Wednesday to monitor the whale. 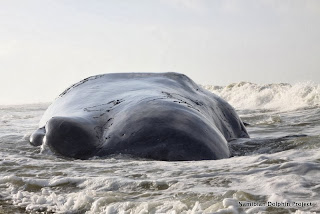 SPERM WHALE FROM THE FRONT - BLOW HOLE TO THE LEFT, JAW UNDER WATER TO THE RIGHT 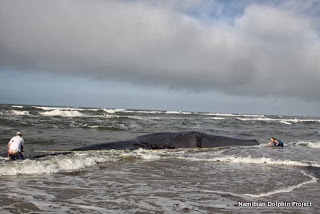 MEASURING THE WHALE IN THE SMALLER SURF ON FRIDAY - EVEN KNOWING ALL THE RISKS, I STILL MANAGED TO GET HIT RATHER HARD BY THE TAIL WHEN A WAVE PUSHED IT INTO MY KNEE! 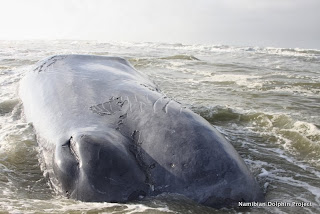 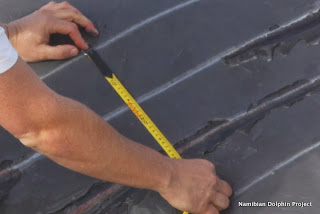