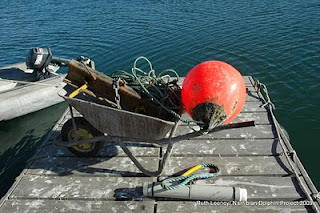 PODs in the Lüderitz area back in August as well, I had hoped to get down to the south, retrieve the units, download their data and get them back out in the water as part of this trip. As my schedule became more restricted, Jean-Paul Roux at the Lüderitz offices of the Ministry of Fisheries and Marine Resources was invaluable in helping out. He organised the retrieval of both units, to have them waiting on land for me when I arrived. Unfortunately, only the C-POD with the surface marker buoy, deployed in Shearwater Bay, was retrieved, so hopefully, efforts in the new year to grapple for the Guano Bay POD will be successful. For now, at least, the first ever acoustic monitoring dataset for this region has been collected - the C-POD logged over 100 days in an area known to be used by small groups of Heaviside's dolphins, and plenty of detections are evident in the data.
The Shearwater Bay C-POD was re-deplyed in the same spot on the 19th of December and will continue to collect habitat use data in this area. I hope to see some seasonal patterns in these data start to emerge, as well as the interesting diel (day-night) patterns already evident!
Many thanks to Heiko and Stefan Metzger on Zeepard for their assistance in the field, and for the 'lekker' place to stay, and to Jean-Paul for his ongoing involvement with this project.
Posted by Namibian Dolphin Project at 20:05 No comments:

Keeping the acoustic monitoring 'clicking' over.... 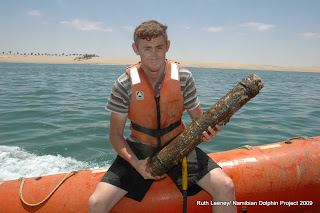 December in Walvis Bay. Turns out the sun actually shines here sometimes! I have come back for a short visit, to check up on the C-PODs Simon and I deployed, with the help of Johann from Levo Tours, at the end of August. It has been just over 3 months, so the batteries are reaching the end of their running time, and after that long in the often-wild waters of the Namibian coastline, I thought it wise to check that the moorings were also still in place and were holding up well against the storms! 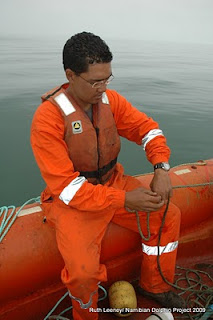 ct's 2 C-PODs at Pelican Point were retrieved last week. After we received a report that the surface marker buoy from this mooring had gone missing (thanks to all our local friends who were on watch in our absence!), a team from Namib Diving went out to the location and grappled for the gear, in and around the deployment location. The waters at Pelican Point have almost zero visibility and are thus not diver-friendly, so we really appreciate the time and effort they put into finding this gear for us. Three months' worth of data were downloaded from each C-POD and at first look, there are plenty of Heaviside's dolphin detections throughout that time period! More details will follow on our findings from this, our first long(ish)-term acoustic data set. Meanwhile, the PODs were spruced up a bit (in the rich waters of Walvis Bay, 3 months is ample time for an assortment of encrusting organisms to make any unsuspecting POD their home), given new batteries and re-set for more data collection, and with the help of Kurt and Darius from Namib diving, I redeployed them at Pelican Point today, whilst numerous Heaviside's dolphins surfaced a few hundred metres away. We also stopped at Aphrodite Beach, to retrieve the third C-POD, which will be re-deployed shortly. A solitary Heaviside's dolphin, about 500 m west of the Aphrodite Beach, was perhaps the first of this species that I have seen in this area, perhaps mirroring the more dispersed pattern of this species in summer, observed by Simon last year. A huge thank you to Gert Le Roux and the staff at Namib Diving for helping me get this done in a short time window.

On another note, the dusky dolphin which live-stranded in Walvis Bay on the 3rd of December generated a bit of press for the Walvis Bay Strandings Network which we have been working to re-invigorate over the past 18 months. John Paterson oversaw the successful refloatation of this animal and by passing the story on to the Namib Times, generated some good press for the Strandings Network and helped to spread the word amongst local people about what action to take, and who to contact, in such a situation.
Posted by Namibian Dolphin Project at 15:17 No comments:

From 2010 onwards we will be accepting interns as part of the Namibian Dolphin Project.

Interns will take part in all project activities and learn a whole host of field and data management skills. Having extra hands to help out will allow us to do more things and get more days at sea and include some extra dimensions to our field research.

For more information on the programme, please see:
www.oceans-research.com

If you're a Namibian biology student and interested in working on the project, please contact me directly to talk about internship and potential student projects.
s_elwen AT yahoo . com
Posted by Namibian Dolphin Project at 18:59 No comments: