Keeping blogs up to date is hard work!  So today I'm going to take a short cut and link you to a video about the dolphins we're working on here in Luderitz and Walvis Bay.  Heaviside's dolphins are the smallest dolphin in Africa and endemic to (i.e. found only in) the Benguela ecosystem on the west coast of Southern Africa.

Most people have never heard of them, let alone seen them - despite the fact that they are easily seen from shore right off the V&A Waterfront in Cape Town (which is about the southern limit of their range)!   So last year we were quite chuffed to get a little exposure for the dolphins and our project when it was featured on 50/50 - South Africa's leading conservation news television programme.

Check out the video here:

Posted by Namibian Dolphin Project at 12:49 No comments:

We're just over halfway through our Luderitz Field Season for this year. Always good to spend some time down here, even if it's quite a challenge getting 5 people, 1 dog, a baby, a boat and a car full of equipment all the way here in one piece. It's only 400 km in a straight line from Walvis to Luderitz, but we can't tow the boat over the dirt roads and have to take the ~1200 km tar road via Windhoek.

Unfortunately, this year my car didn't make it and just north of Keetmanshoop the cylinder head blew leaving me, the boat and the dog stranded!  Quite a mission getting everything the last 500km to Luderitz but we managed to do it and my car has been left in Keetmans awaiting a new engine ($$$ !!!).  Working without a car is a major challenge when you need to cart lots of equipment around town, launch and refuel boats etc etc. So my first priority at the beginning of April was to find a car to use.  Lots of phone calls and emails later and M&Z Motors came to our rescue by lending us a double cab Triton for the field season!  An absolute life saver and a HUGE thanks from all of us for the help while we await a new engine being delivered for my car.  Here are some pics of the Triton helping us load the boat down at the slip way: 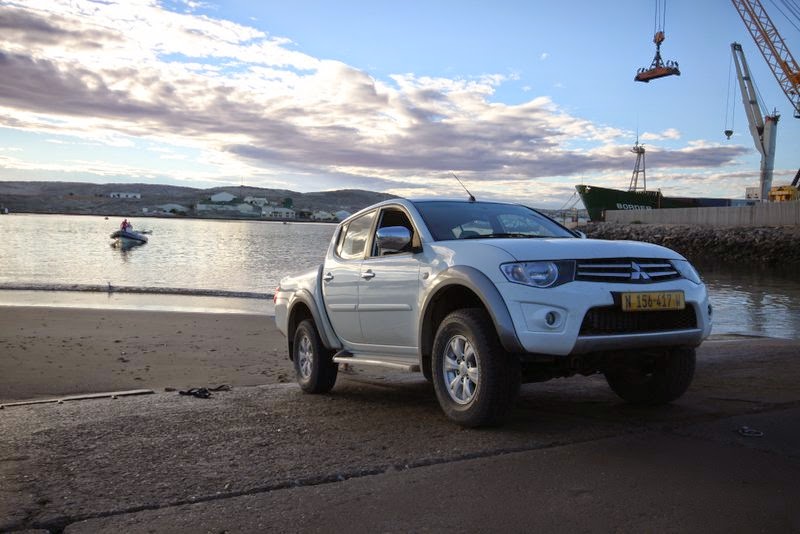 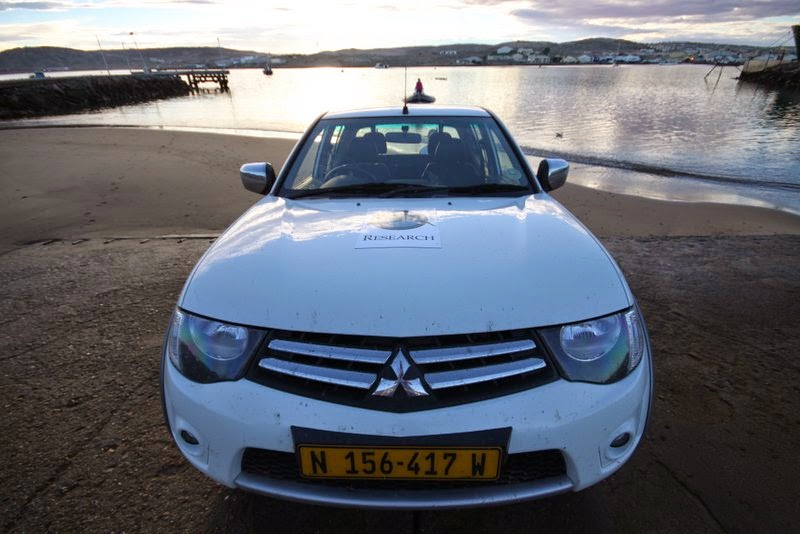 The marine wildlife around Luderitz is fantastic and strikingly different to what we see up in Walvis Bay, despite being only 400km to the south.  There are several reasons for this, including the strength of the upwelling which happens down here creating a very rich and dynamic ocean and also that the continental shelf is much closer to shore here (about 30-40 km compared to over 100km in Walvis), so we tend to get more 'offshore' species here including large whales.

We were lucky enough to have a group of fin whales (Balaeoptera physalus - the second largest species of animal in the world!) hanging around for a few weeks. We only encountered two of them twice from the small boat just off Luderitz but saw an even bigger group of 6 animals about a week after that during our first ship survey of the Marine Protected Area.  This is the time I've ever seen a fin whale and the first time anyone is aware of, of a sighting of this species close to shore in Namibia!  So a great sighting for all of us. No idea why they have been hanging around so close to shore, but very happy that they were. 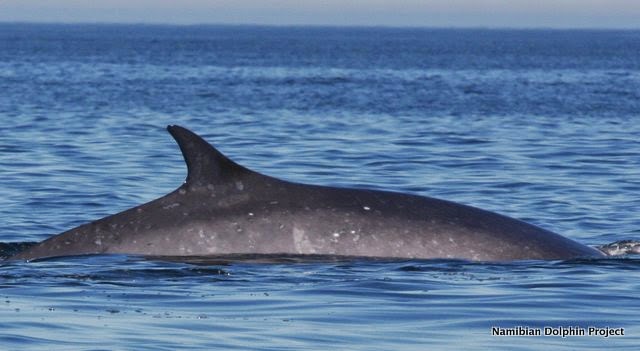 Posted by Namibian Dolphin Project at 20:36 No comments: