After completing my thesis about human impacts on Heaviside’s dolphins (Cephalorhynchus
heavisidii), I have now taken up the opportunity to do a 3-month internship with the Namibian Dolphin project (NDP), where I have been involved in the daily running of the NDP office in Walvis Bay.

My day is mostly spent attending to curious and interested visitors that walk into the office and working on photographic data from Lüderitz, Namibia. I’m involved in two projects currently run by NDP: 1) the lagoon survey (done on foot along the 3 Km long walkway around the lagoon) and 2) the tour-boat surveys (done on boat in the 100 km2 Bay). The lagoon survey is carried out in order to determine how frequently bottlenose dolphins (Tursiops truncatus) use the lagoon, a RAMSAR site under threat from urban development such as an “Eco-tourism” hotel proposed to be constructed at Lover’s Hill right along the lagoon. The tour boats surveys are carried out in order to determine the abundance of bottlenose and Heaviside’s dolphins as well update the existing ID catalogues of both species. Walvis Bay is a vital dolphin habitat which also faces threats from a harbour extension currently under construction. There needs to be extensive monitoring of the bay and lagoon to assess the severity of these developments on the natural environment which is currently not fully understood. The NDP is able to carry out boat-based surveys in the bay, thanks to the kindness of three tour boat operator companies Mola Mola, Catamaran Charters and Laramon tours. 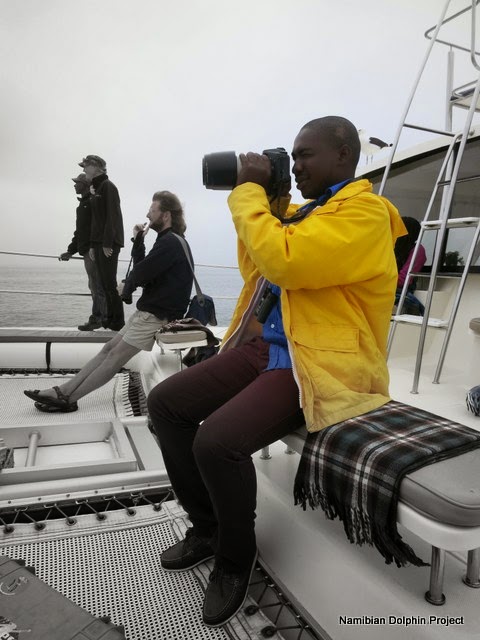