Last Saturday (02 August 2014) a small whale was reported to have stranded alive at the Walvis Bay Salt works pump station. Many whales and dolphins have been recorded to strand there in the past. We think that the dead end nature of this corner of the bay, the shallow slope of the sea floor which makes the tide rise and drop very quickly and the many channels in the area confuse animals which might be trying to leave the bay by a direct westerly route. What this means is that many of the animals which strand here are often healthy and rescuable (most solitary whales and dolphins which strand tend to be sick, old or injured). Read more about this theory in Ruth Leeney's paper on pygmy right whale strandings in this area: Paper on the NDP website here 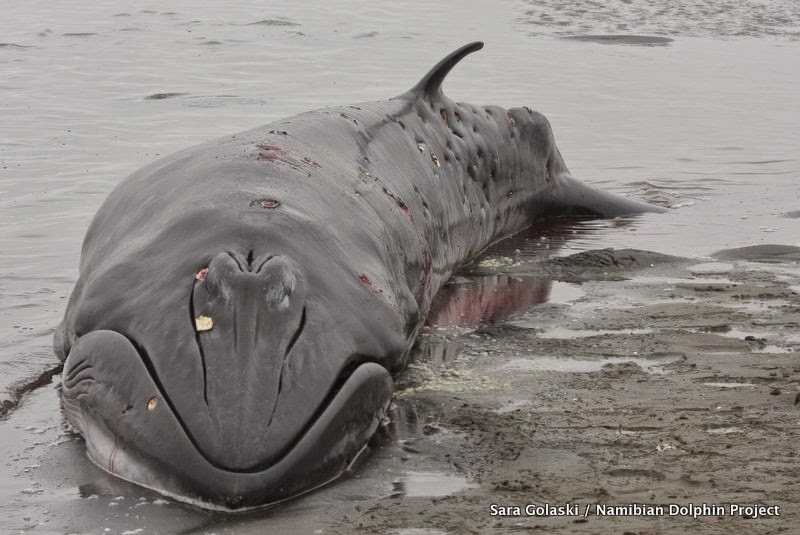 Sara Golaski, MSc student with the Namibian Dolphin Project coordinated rescue efforts and managed to get small team of local volunteers out to the pump station by 11am. The animal was assessed and although it looked rather emaciated it seemed strong and was also small enough at 5.7m long to be potentially rescued. After taking a skin sample for genetic analysis and a range of standard length measurements to ensure species ID, the animal was kept wet and cool with towels while the team waited for the tide to come in (their thick blubber layer and dark colouring means that whales can overheat quickly when out of the water). Local company T&T Marine provided a large ski boat to assist in the rescue. Once the tide was high enough the animal was rolled gently onto the rescue stretcher and manoeuvred into deeper water alongside the boat. The small whale (its sex still unknown) was held in the stretcher along side the boat and moved out into the middle of the bay in the hope that it would be able to navigate around Pelican Point. It's very hard holding a nearly 6m long whale (which could weigh as much as 3 tons) in a stretcher alongside a moving boat and the animal eventually wriggled free and swam off into the choppy sea. 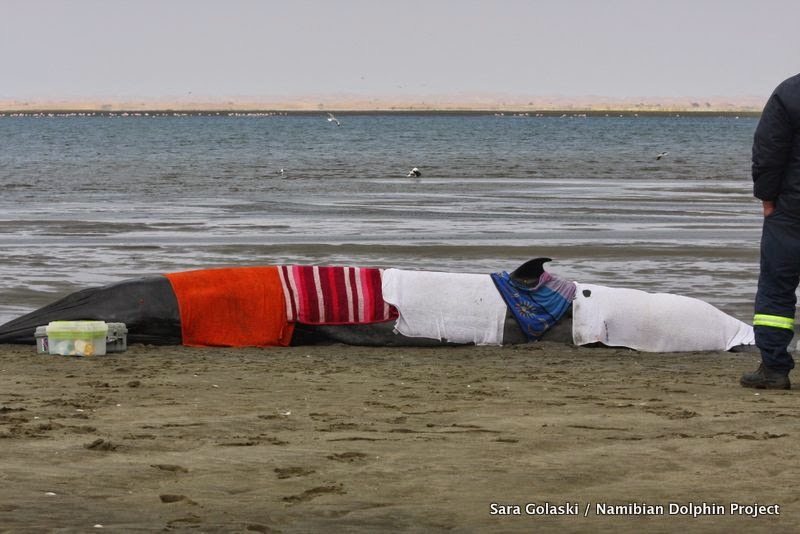 Although the wet and exhausted team were all hopeful the animal had made it back out to sea, it was reported to Sara again on Sunday morning. With help from Margot Jefferson, Sara managed to get back out to the whale, but by early afternoon with the tide still out, the whale was looking very exhausted, breathing irregularly and in poor shape. Unable to get sufficient volunteers to help move the whale, the decision was made to let nature take it's course.

The whale was a juvenile Bryde's whale (Balaenoptera edeni) and is the 4th of this species to strand in Walvis Bay in the last 3 years (2 adults at Long beach at 2012 and 2013 and a calf at the pump station in 2012 - we have no records of the speies stranding here prior to that). Two genetically and physically distinct populations of Bryde's whales live off the coast of southern Africa, one offshore on the west coast which migrates from Southern Africa in summer up to the Equatorial regions in winter and a second smaller population which was  thought to live only on the Agulhas Bank off South Africa until one was found in Walvis Bay in 2012! 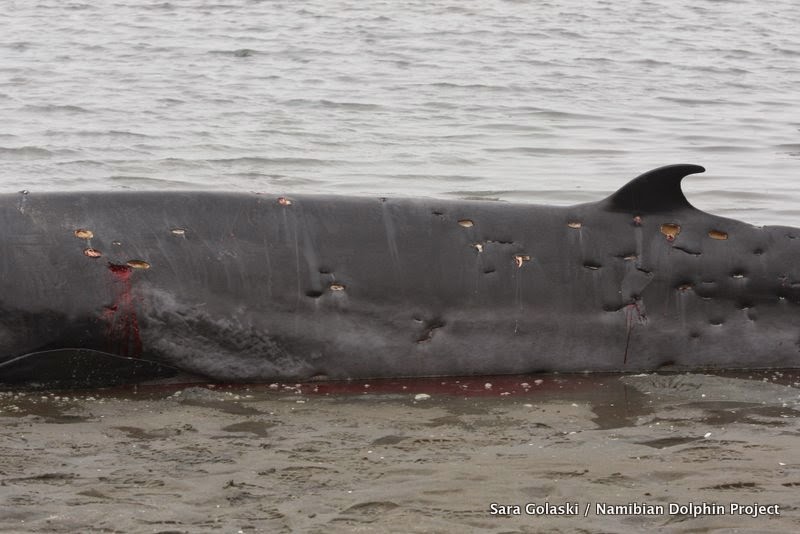 The bites and scars on the whale are caused by cookiecutter sharks (with a little help from local seagulls reopening the wounds) which are thought to live only in the warmer waters beyond the Bengeula current. The freshness of these bites suggest that the animal must have moved in rapidly from deeper water, probably in the last few days. These bites are more common on offshore Bryde's whales but genetic analysis will confirm which population this animal belongs to in due course!

We know so little about these pelagic whale species and strandings provide a very valuable information resource for scientists, like those at the Namibian Dolphin Project. Although rescue isn't always possible, the NDP has 2 stretchers to lift small dolphins and whales and does it's best to coordinate refloatation efforts.  We're a small team running on an even smaller budget and every bit of support helps - so please drop us a line or pop into our environmental office at the Walvis Waterfront if you're interested in being involved in the strandings network or can help out with equipment or funding. (nam.dolphin.project@gmail.com or 081 687 6461).  Learn more about research on this enigmatic species in South Africa at the SA Bryde's Whale Project Facebook site.

A big thank you to everyone who helped out with the rescue on Saturday, especially Margot Jefferson, Toya Louw and T&T Marine.


Posted by Namibian Dolphin Project at 11:40 No comments: