Well it has been about 2 weeks since I landed here in Walvis Bay and I can’t believe how fast it has gone by. I am loving everything so far and I have learned so much in just two weeks’ time (don’t touch the jellyfish).

My favorite part of the past 2 weeks was the humpback whale stranding we had early the first week. It was my first time seeing a whale up close and personal so it was an exciting experience for me. After we took some measurements and some blubber samples it was decided that the whale probably died of natural causes.

The other interns and I have also had quite a few encounters with live whales while out on the boat. I remember the first encounter with a humpback I had and turning to Bethan, another intern, and just smiling and saying “this is so cool!!”.  It is surreal when you see these guys for the first time; they are so big yet so graceful in the water it is hard to believe that they weigh so much. I don’t think that I will ever get tired of the whale encounters while here in Walvis Bay. Another fun part about my trip so far is all the interesting birds that can be found in Namibia, especially near the coast. It is my goal by the end of the month the name all the birds of Walvis Bay CORRECTLY! :D 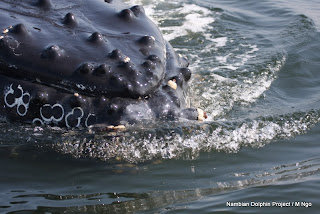 Posted by Namibian Dolphin Project at 21:01 No comments:

Day off in the Desert

Even on a day off, myself and the other interns this month spent it surrounded by and continuing to learn more about the nature around us.

At about 8 A.M. we were all picked up to start our desert tour in the Moon Valley of Namibia. Right away, our tour guide began to give us more information than we really knew what to do with but we were all intently listening and absorbing every word. We were informed about the culture of the local area, the history, and the economic changes that will be occurring soon with the construction of a uranium mine and desalination plant. Although we were all very interested by this, my favorite part began once we entered the moon valley and began learning about the plants and animals which are adapted to live in the desert. We learned about beetles who will do headstands every night to collect the condensation from the air with their body and allow it to drip down to their mouths, plants with roots that extend up to 60 meters underground to find a water source, spiders who build their webs under a layer of sand where they can hang out under it protected and only come out when food is at the edge of the web, and much bigger animals like ostrich who will eat very bitter fruits and leaves because of the high water content within the plant. We also learned about how local cultures found uses for the plants adapted to live in the area and much, much more. It was truly a different world and we were lucky enough to see even just a small amount of it and thoroughly enjoy our first day off here in the wonderful Namib Desert. 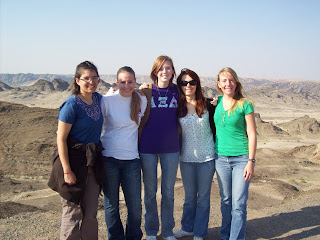 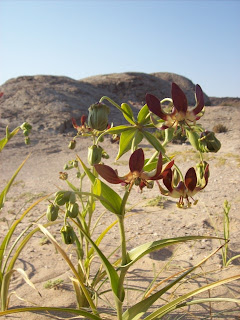 Posted by Namibian Dolphin Project at 20:58 No comments: 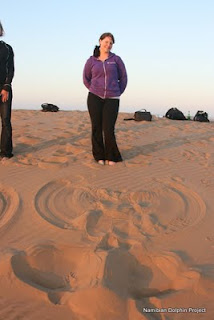 (Note from Simon  - It's not all about work - this is Cayla and her sand angel on Sunset Dune. Acoustic projects don't make for good photos, so I've put this one in :).
Posted by Namibian Dolphin Project at 19:09 No comments:

Weather - what we talk about all the time...

Since our lives are controlled by the weather, I thought we should dedicate a whole blog post to it :)
by Heidi Etter
What’s the weather like in Namibia?  It is a common question asked by interns that have been accepted to the program.  The answer is it can be very fickle.  The key thing to remember is contrary to popular belief, everywhere in Africa is not hot!  is located in the southern hemisphere and the coastline is bordered by the cold, upwelling Benguela current and weather conditions are wind-driven.  And since Namibia is in the southern hemisphere, the months of the internship, June, July, and August are during the winter months.
You would expect it to be warm in , even in the winter since it is bordered by the desert, however, this is not the case.  The only time you will get warm weather here during the winter is when the east wind blows off of the desert, though this is usually accompanied by a sandstorm for part of the day.  With all of this being said, expect it to be cold…expect it to be even colder on the boat on the water.
Perfect example of the weather conditions…the other week starting on Sunday, we had beautiful weather because an east wind was blowing…the sun was shining…we were on the boat in flip flops, shorts, and t-shirts (well some of us were)! Then bring on Tuesday…the wind changed to the southwest and we were freezing! Layers of thermals, fleeces, jackets, warm hats, etc. you get the point!  Everyone’s noses looked like Rudolph the reindeer because they were so red from the cold.  Out at sea on Wednesday, the morning started out with three layers of clothing, it was foggy and windy and we were drinking coffee to stay warm.  By  the afternoon, it was nice and sunny but the wind had picked up to 13 knots  making for a bumpy and chilly ride home. However, once on shore because it was sheltered and the sun was radiating its heat on us…we decided to go for a refreshing afternoon swim.  To sum up that experience…imagine a polar plunge…it was shocking to the body cold.
So to answer everyone’s questions on what the weather is like in …nobody knows…not even the weather forecasters because they are always getting it wrong.  Prepare for cold and hot weather conditions…it just depends on which way the wind is blowing, literally! 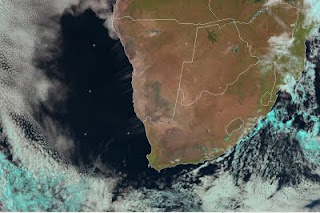 Satellite photo of the east wind blowing sand out to sea - taken in June last year
Posted by Namibian Dolphin Project at 21:54 No comments:

All in all a very productive month - many thanks to Mel Ngo, Cayla Vandenaweele, Hannah Murphy, Kuan Li and Kassler Peh!  Great to meet you guys and thanks for coming out to help with our project.
Simon, Tess and Heidi 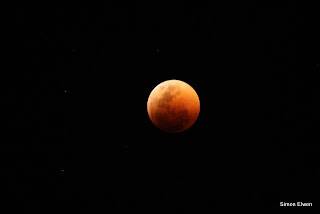 Posted by Namibian Dolphin Project at 15:45 No comments:

We'd like to thank Daniel Gard from Virginia Beach, Virginia, USA.  At the beginning of the 2011 winter field season, he graciously donated a Panasonic Toughbook laptop to the project.  As resources are very valuable and limited in fieldwork, the donation of such an important piece of equipment greatly improves the productivity of our project.  The laptop has already been utilized extensively in data management and processing during this field season and will allow us do more advanced acoustic recordings at sea in the future.  Thank you again Daniel for your generation donation to the Namibian Dolphin Project!
Posted by Namibian Dolphin Project at 17:40 No comments: