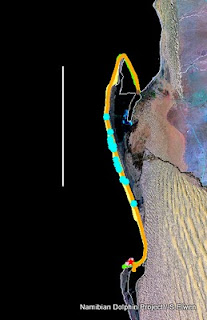 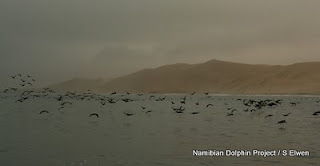 Posted by Namibian Dolphin Project at 23:07 No comments:

While out yesterday on a fairly average misty, windy day, we encountered a Heaviside’s dolphin with clear propeller wounds down the length of its body. As you can see from the photos below, it was quite a horrific looking injury. However, the animal was remarkably unafraid of the boat and would still occasionally bow ride our boat and we hope it will make a full recovery over time.

Why dolphins bow ride is not fully understood, but simple ‘play’ behaviour is the most likely reason. It's occurrence is clearly affected by the behavioural state (or mood) of the animal, as well fed or socializing animals bow ride far more keenly than those which are busy hunting or resting. Dolphins ride swell in the open ocean and surf near beaches and they will even ride the bow wave of large whales. The behaviour may be related to the practice of swimming in their mothers slipstream as calves. Heaviside’s dolphins, when in the mood, are particularly avid bowriders. Heaviside’s dolphins will even ride a boat going in reverse, when they swim very, very close to the engines. The keenness with which some species and individuals bow ride can be likened to dogs chasing cars. And it is the role of the boat skipper to bear in mind that just because an animal will react in a certain way to a boat, it is not necessarily a good practice to do it (would you throw stones at elephants to make them charge you?).

The high amount of boat traffic at Pelican Point has always been a concern to local conservation organizations and understanding the potential impact of this traffic was one of the motivating factors behind the development of the Namibian Dolphin Project. Sightings like this re-enforce the need for protocol compliance and the application of common sense and environmental responsibility while interacting with these fantastic animals. 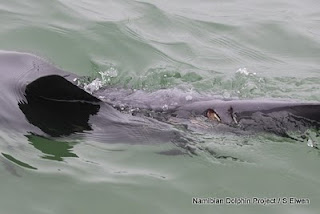 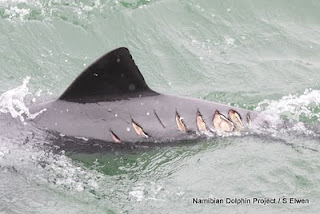 Posted by Namibian Dolphin Project at 15:00 No comments: 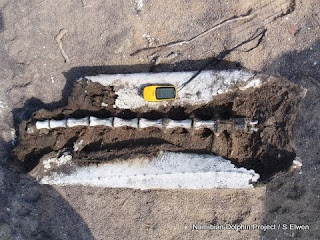 “There is a sufficiency in the world for man's need but not for man's greed.” ~Mohandas K. Gandhi (Warning: Some readers may find the pictures in this blog post disturbing).

Yesterday, we took a shore-side drive to to scope out potential launch sites with the hope of expanding our coverage of the coast to the north. However the tone of the trip quickly changed to a beach scavenging expedition as we learned the truth behind the “.” We found countless fur seal skeletons, a few leatherback turtle carapaces that had been bleached in the sun, dozens of stranded shore birds, and four spotted gully sharks. The majority of the carcases were there due to natural causes, but every shark we found had been hooked and carelessly cut from the line. 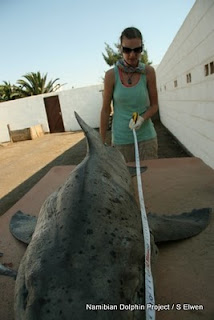 When your career is in a biological science, especially one that is based in field research, you are exposed to life and death daily. You come to understand that cycle as an integral piece of a healthy ecosystem, and seeing a natural death of an animal changes from a mournful moment to solemn recognition of a bigger process in action. But, when you come upon an animal that has had its life taken by a hook, or a piece of line that cuts through its body, or a plastic bag lodged in its throat, you never stop feeling infuriated.

The first spotted gully shark had been killed within the hour we found it. It was a female, her gills were bright red and her body was still cold to the touch (cold because she had just been in the cool water, if she had been on the beach for awhile, her skin would have been hot from the sun – like the other three sharks we found). The line had cut through the corner of her jaw and it was obvious she had given the fishermen a “lekker fight” since the tension of the line had worked a massive wound into the side of her face. Out of curiosity, we collected her to do a full autopsy to further determine her cause of death, but were not expecting to find that the majority of this 1.55m shark’s body cavity was uterus. She was carrying 8 pups, 4 female and 4 male, all around 33cm in length. We eventually found the hook, which had punctured through her oesophagus, worked into her pericardial cavity, and pierced the left side of her heart. It is impossible to tell which of these injuries killed her first. 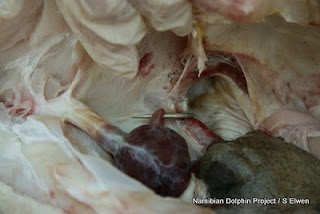 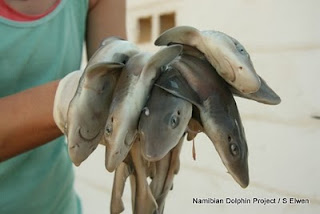 A mass loss of life like this feels overwhelming when you extrapolate it to all the world’s beaches, especially when you consider how this pales in significance to some of the horrors happening in the offshore fishing fleets. It is legal in to catch spotted gully sharks and they are classified on one of the lowest ranks by the IUCN Red data list as “near threatened”. However, it is important to recognize this type of blatant waste in order to inspire more research, more students, and further grasp the sense of urgency our oceans are silently suffering. If nothing else, the death of those sharks inspired a blog, maybe a few conversations, and perhaps some of you readers got to see images that are unfortunately all too commonplace to us in marine biology. 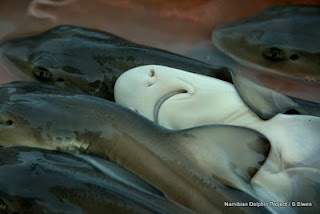 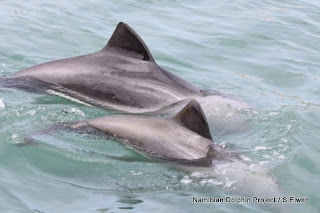 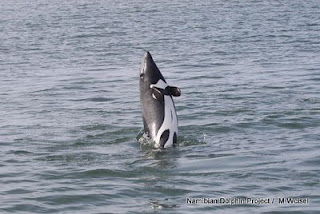 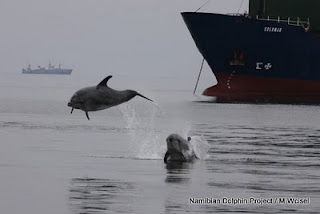 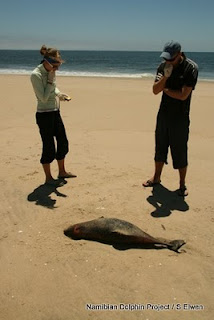 Posted by Namibian Dolphin Project at 23:30 No comments: