One of our own

For the first time in my career as a marine mammal biologist, I saw one of my study animals dead. I've seen loads of dead whales and dolphins since I started along this path and I've identified lots of whales and dolphins photographically. But Walvis Bay is the first project I've worked on long enough, that I've got to see and get to know some of the animals as 'individuals'. We have regular of Heaviside's we know but it's the bottlenose population here (~80-100 animals) that become like old friends after a while. The majority of them are easily identifiable and I've had a particular fondness for the mothers in our population, which are frequently seen together, so it was a little sad finding one of them dead on the beach.
Animal T-017 was first seen by us in June 2008 with a small calf and on several other occasions during out pilot study. 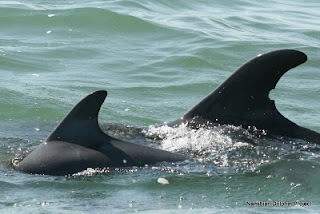 She wasn't seen at sea during the summer field season of 2009 but was one of the 19 animals which stranded in the lagoon in March, were tagged with seal flipper tags and rescued. She was actually tagged twice on that day, the first time was unsuccessful and left a partial hole, the second time went all the way through. Since this time she has hardly been seen at all in the bay area.

She was seen in the winter field season (Aug 2009) with her tag still in her fin, not seen in the summer of 2010 and only once in the current winter season. 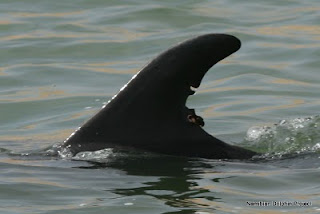 Then, a dolphin was reported dead on the beach north of Swakopmund a few weeks ago and when we went to investigate, it turned out to be one of 'our' bottlenose dolphins, T-017.

She was fairly decomposed, and had a few shark bites along her belly. It's impossible to tell if these occurred before or after death, but judging from their size are probably from a bronze whaler shark which are common along this coast.

So..we've lost a mother from this population. We kept the skull and from the teeth, it may be possible to age her one day. 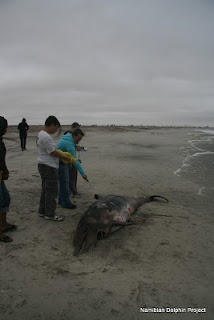 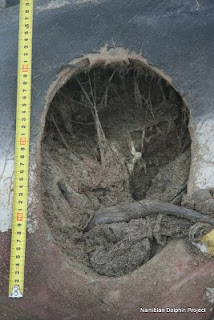 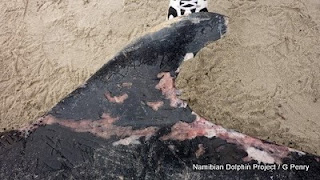 Posted by Namibian Dolphin Project at 20:13 No comments: