A little later, but better than never :

An estimated 15 ton whale, later identified as a sei whale (Balaenoptera borealis) was reported to the Namibian Dolphin Project (NDP) on July 19th by local windsurfers. It had beached itself along the speed strip next to the Walvis Bay Lagoon and rested in shallow water.  Before anything could be done by the Walvis Bay Strandings Network, a group of quick thinking kiteboarders and windsurfers had already managed to urged back into deeper waters, where it was lost into the choppy seas. They reported the valuable details to the NDP but were unable to identify the species as whales in this family can be difficult to tell apart. The whale was not found again that day, but was discovered the next morning by marine tour operators who reported that it was swimming in extremely shallow water near the salt works pump station, an area of frequent whale strandings.

The whale re-stranded there, and was afterwards attended by researchers from the Namibian Dolphin Project and volunteers from the Walvis Bay Strandings Network. The animal, very unresponsive though still breathing at this point was identified as an adult sei whale, an elusive offshore species of baleen whale. Sei whales occur in all oceans, but are rarely seen as they do not normally venture inshore. Unfortunately this one was far too large and too shallow for a rescue to be possible, though researchers were able to collect photographs and a skin sample for later analysis. The animal had passed away by the next morning without having moved from where it stranded. Basic measurements of the female sei whale taken at the scene put it at 15 meters long. Its dorsal fin alone was half a meter high and its tail flukes were 3 meters wide.

Although sei whales were historically caught in Namibia and west South Africa by commercial whalers, this is the first record of one stranding on the beach, highlighting the importance of these events for researchers to understand more about these animals. Nothing is known about the current population size or habits of sei whales in Namibia. They live offshore where they are difficult to study, but simultaneously exposed to several potential human threats including phosphate mining and seismic exploration for oil and gas.

A big thank you to Sara Golaski, John Paterson, Sue Roux and Margot Jefferson for getting out to the animal to assess it and collect data. Also to Willi Deetleefs for passing on the info to us on Saturday morning and most of all to Des and Miguel, for reporting the stranding to us in the first place. 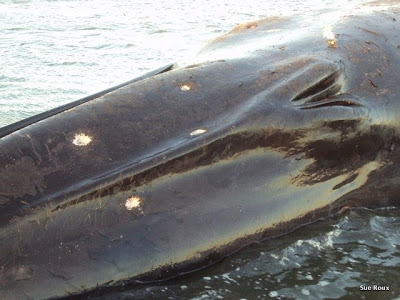 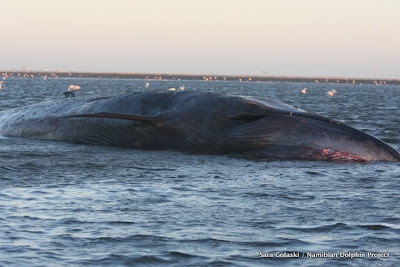 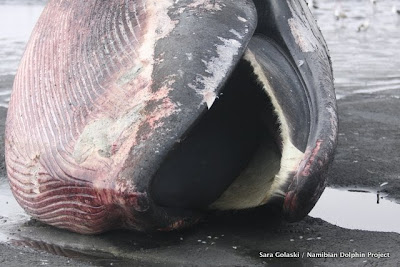 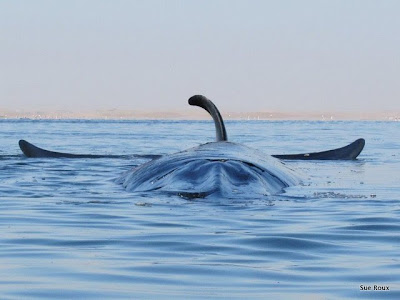 Posted by Namibian Dolphin Project at 23:26 No comments: