A rare and mysterious visitor in Walvis Bay

Gray whales, Eschrichtius robustus, live in the high Arctic and northern Pacific Oceans coming as far south as Baja California and Mexico on the west coast of America and the Korean Peninsula to breed in summer. It used to occur in the North Atlantic Ocean, but was hunted to extinction in the 1700’s. It does not venture south of the equator. Or so we thought.

Last Saturday, 04 May 2013, tour boats doing dolphin cruises to Pelican Point saw a strange whale. Several more sightings during the following week seemed to indicate the unlikely fact that a gray whale was visiting Walvis Bay! On Sunday 12 May a member of the Walvis Bay strandings network confirmed the reports that there was a gray whale about. This is the first known record of this species in the Southern Hemisphere. The question is now “what is the origin of this whale?”
In May 2010 a gray whale was seen off Israel in the Mediterranean sea and the same whale was seen 22 days later in Spanish waters, also in the Med. This sighting raised much speculation on the origin of the whale and the reasons for its appearance. It was suggested that the whale originated from the eastern Pacific population and was able to navigate around the northern Canada due to the reduction in size of the Arctic ice cap caused by global warming. This climatic trend would potentially allow these whales to re-colonise their historic range in the north Atlantic. The authors of that report stressed that it was difficult to draw conclusions from a single event and were only proposing likely hypotheses. Three years later a gray whale makes its mysterious appearance in Walvis Bay. Comparing photographs of the Walvis Bay animal with the Mediterranean animal (courtesy of Aviad Scheinin -  http://www.hamaarag.org.il ), it seems unlikely that this is the same individual. Is it another individual that has traversed the North West Passage, or perhaps travelled around the southern tip of South America and across the Atlantic? Unfortunately, we’ll never know the route it followed to get here but keen eyes on the water may tell us where it goes next, so please send your reports to the WBSN if you see this animal.

Gray whales grow up to 14 m in length and undertake the longest known migration of any mammal completing a round trip of over 30,000 km between their summer feeding grounds in the high Arctic and winter breeding area off the coast of Mexico returning to the high Arctic again. The whale seen off Israel had completed the longest known stray by any mammal. Though they are baleen whales gray whales are unique in that they feed off the bottom of the sea floor by sucking up mud, usually through the right side of their mouths, and filter out the bottom mud dwelling amphipods on which they feed. This results in the baleen being shorter in one side of their mouths.
This sighting highlights the chances of seeing amazing animals in Namibia and also how important our marine environment is to sea life. Well done to the marine tour operators for locating this whale and operating in a responsible manner and not scaring the whale off. The Walvis Bay Strandings Network would like to thank the tour operators for passing on all sightings of this whale and particularly Mola Mola Tours for making space on their vessel so that we could confirm the identification and get photographs. 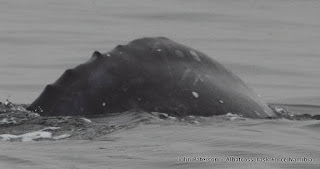