Are there whales using all of the coast? What habitats do Heaviside's dolphins use apart from Walvis Bay and Luderitz? At what time of the year do turtles start using Namibian waters? These and many other questions have crossed my mind, and been asked by others, so often since we started our research here in 2008. One excellent means of addressing some of these questions is to survey coastal waters from the air. Aerial surveys 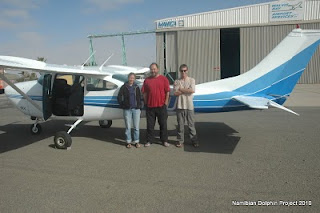 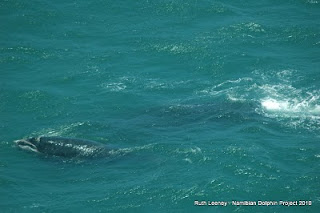 allow for a large study area

to be covered in a relatively short period of time, and in a wider range of sea conditions than are suitable for boat surveys. An aerial perspective makes it much easier to detect and identify whales and dolphins since they can be visible even when they are beneath the water surface. When the Bataleurs, an organistion of volunteer pilots interested in conservation, provided me with the opportunity to run an aerial survey along the coast, I was delighted.

Early morning conditions were misty on the coast and we discussed the survey plan as we waited for the horizon to clear. Shortly after 9:00, we were on our way, with calm seas and surprisingly clear waters as our Cessna 182 survey plane headed south at 300 ft. Immediately we started to see small groups of Heaviside's dolphins. In fact, there were a surprising number of Heaviside's dolphins south of Walvis Bay. This is one of the focal species we study in the bay and in Luderitz, but we have not been able to study them outside of these two regions. Today I realised that they use a far greater part of the coast than I thought. Having refuelled in Luderitz, we set off south again 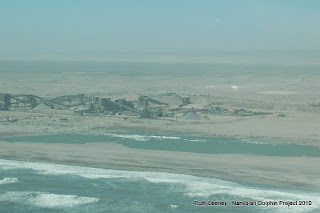 and very soon afterwards, sighted our first whales - a mother and calf southern right whale. Another four right whales were seen north of the border. Further south, the coast becomes ravaged by diamond mining and is a really shocking sight.

We flew the entire coast from Walvis Bay to Oranjemund (at the border with South Africa), thus covering the southern half of the Namibian coastline. Total sightings came to 63 Heaviside's dolphins, two dusky dolphins, six southern right whales and two ocean sunfish. No turtles were sighted - the water is likely still too cold for them. Many thanks to all who made this possible: Joan Cameron and the Bataleurs for organising the survey; Nico Louw for his time, flying skills and the use of his plane; John Paterson and Francois du Toit for filling the observers roles.
Posted by Namibian Dolphin Project at 20:22 1 comment:

by Ruth Leeney
Walvis Bay, 8 am. I get an email saying there are two bottlenose dolphins well into the lagoon - it looks like they're going to strand near to where the mass stranding occurred last year. John Paterson and I dashed to the lagoon, and met with Francois who had been keeping an eye on them as they swam in circles. As we got there, they had turned around and were heading northwards at quite a fast pace, towards deeper water. Good timing too - the tide was going out. I guess this pair of bottlenose dolphins were just keeping us on our toes and checking that the chain of communication in the Walvis Bay Strandings Network does indeed work. Thanks to all the local folks involved in getting the word out this morning.
Posted by Namibian Dolphin Project at 11:11 No comments:


Today, I tagged along on a marine wildlife trip on Zeepard, run by Heiko Metzger. There are lots of box jellyfish (class Cubozoa) in the waters around Lüderitz at the moment.

Perhaps as a result of this, a sunfish was our first sighting of the morning. A big fin flopped on the surface, suggesting quite a large Mola mola beneath, but it did not reveal any more of itself and made a swift departure from the scene. Sunshine turned to thick fog at Diaz Point and then back to sun 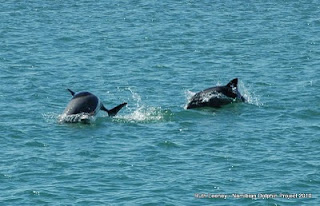 shine again. There were lots of bow-riding Heaviside’s dolphins and several of them also breached and even back-flipped a number of times – more than I have ever seen in Lüderitz, or even in Walvis Bay, before.

There were many Heaviside’s dolphins in Shearwater bay, several hundred metres from where one of the C-PODs is moored, which is always good to see! Towards the end of the trip, Heiko decided to explore over on the other side of the entrance to the harbour, where they sometimes see minke whales. Instead of a minke, we encountered a juvenile humpback whale. At first it seemed disinterested in the vessel and kept its distance, but after ten minutes or so, it fluked and then only minutes later, breached about 100 metres ahead of us! A while later it sta

rted spyhopping, though a little far away from us, and then started to nudge around some kelp for a while as it swam in our direction. It eventually surfaced very close to boat, twice, affording everyone a close-up view before it decided we were rather boring and swam off. Thanks as always to Heiko and Stefan for letting me join the trip.

Posted by Namibian Dolphin Project at 15:25 No comments: 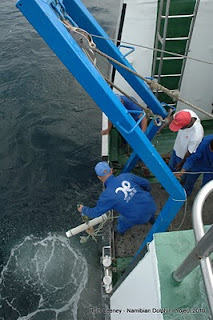 It has been almost a year since I have been in Namibia, so I had some catching up to do. After a few weeks of office work, emailing, meetings and observations in Wavis Bay, I headed south to fulfil my usual duties with the acoustic monitoring gear deployed there. The project has been carrying out acoustic monitoring for odontocetes at two sites in the coastal waters of Lüderitz for a year and a half now, and I’m looking forward to seeing what patterns in habitat use start to emerge from the data. Having arrived I spent the afternoon and evening downloading data from the two C-PODs and their associated temperature loggers, and resetting the instruments for redeployment.
Early on the following morning, I boarded the RV !Anichab to redeploy both C-PODs and allow the time series of acoustic data to continue. I had much help from the crew with sorting out the moorings and getting the heavy anchors over the side as we deployed each mooring. I’m very grateful to Jean-Paul Roux for organizing this trip on the Ministry of Fisheries’ 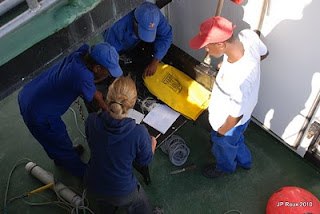 research vessel.
Posted by Namibian Dolphin Project at 14:56 No comments: