Slow on the updates recently. We wrapped up the season in Walvis Bay and left town on the 26th March as I had to give a talk up in Windhoek at UNam. I've never been there before, it's quite a small university compared to Pretoria or UCT, but a nice campus. The talk went well, there was small, but interested crowd who asked lots of questions, which is always nice.
Then moved on down to Luderitz to go service the hydrophones down there and collect some skin samples for analysis. I couldn't have done it without the help of Jean Paul Roux at the Ministry of Fisheries. We took out their research ship the Anichab (actually it's "!Anichab", but apparently if you mispronounce the initial click represented by "!", you turn it into a rather rude word, so most folk err on the side of the English pronounciation and just start with the A...). It was a good few days (although pretty windy the whole time), and great having a whole ship and good crew to help with everything. Hauling the hydrophone moorings is a pleasure with a winch, and we got them cleaned up and put back in in no time. I put down another hydrophone just at the northern edge of the Lighthouse bay, to replace the one in Guano Bay that is still AWOL. Biopsying was slow work as the weather didn't play along and the dolphins weren't as super friendly as they usually are in Luderitz, but we got there in the end.
Exciting sighting of the week - 2 minke whales! Apparently there are two or three in the bay which have been around and seen on a weekly basis since December by Heiko Metzger (Zeepard Tours). I've put in a few photos below of hauling and cleaning the hydrophones and the minke whales as seen from the ship and one of JP's pics of me and the !Anichab crew out in the little dinghy trying to get biopsies.
More exciting news - JP just emailed me the other day to say that a few bottlenose dolphins had been spotted in the bay and they all had large distinctive markings. The Walvis Bay population isn't supposed to range so far south (it's ~400km from Walvis), and bottlenose dolphins that have been seen there previously are thought to be vagrants from the offshore populations. However...photo ID will tell and hopefully the Luderitz locals can get us some usable photos.. i'll keep you informed. 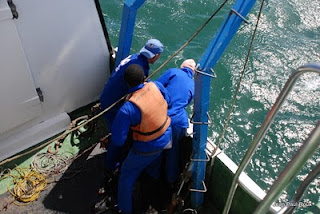 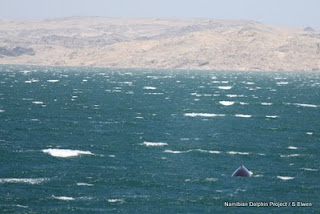 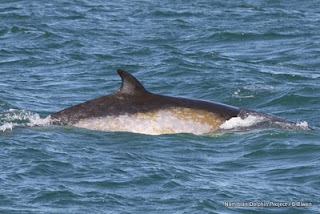 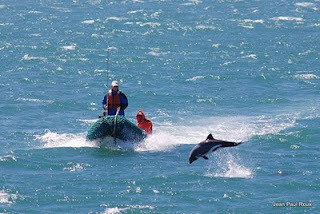 Posted by Namibian Dolphin Project at 17:06 No comments: