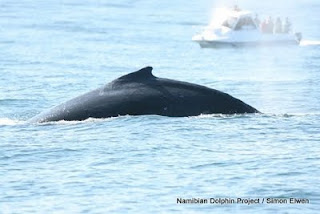 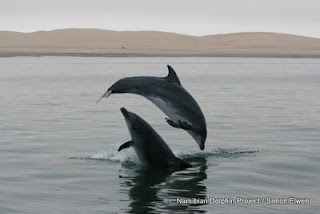 Posted by Namibian Dolphin Project at 08:23 No comments:

The winter field season has started again. I’m rather behind in updating the blog as you’ll notice from the date! Have been pretty busy and doing most things on my own for the first few weeks.

In summary – Unfortunately Pedro, who we used last year as a phenomenally generous loan from Pelican Tours, wasn’t available any more. However, the project is making good head way and we’ve managed to secure our own boat this year which makes us more flexible in terms of time spent at sea and when and where we launch. She’s a nice little boat, which I’ve called Nanuuq (which is Inuit for polar bear – I wa trying to avoid the more obvious dolphin based names). As a new acquisition which had been standing for a while in the previous owners driveway, she has unfortunately taken a fair bit of teasing back into shape. New batteries, spark plugs, had to get most of the safety equipment, winch strap broke after seeing too much sun in the last few years, dirty carbs…lots of frustrating little things like that to keep us busy. 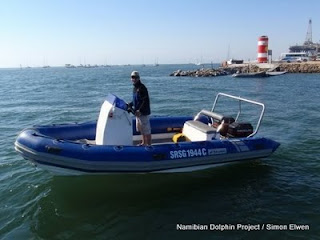 Ruth couldn’t make it out for the beginning of the season this year due to work commitments, so I started this season by roping in a colleague of mine from the University of Pretoria, Trevor McIntyre to do some skippering for me. Trevor is doing his PhD work on elephant seal foraging behaviour in the southern ocean. He’s using data from electronic tags attached to the seals on . Fascinating stuff and a quite different approach to the type of work we’re doing here, but in many ways answering the same core questions of distribution and ecological interactions.

We had a few good days out to sea in between all the boat mechanicing. There were some really dominant east wind conditions here to start the field season, which made for hot, dry sandy mornings with katabatic winds howling down off the desert. But these conditions always drop in the afternoons as the southerly winds fight back, often resulting in a warm, calm truce out in the bay. 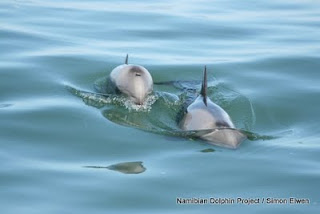 Nice for us to get out in the afternoons a few times as its almost impossible during the rest of the year due to the strong winds in the afternoons – and it’s really lovely to be on the water in just a t-shirt in this part of the world!! The Heaviside's dolphins have been as fickle as always, some days they’re all there and super boat friendly, while other days you can barely find a single one.

Posted by Namibian Dolphin Project at 21:29 No comments: