The !Anichab had some gearbox problems a few weeks ago (before we left for Cape Town) and unfortunately it's still not fixed..

So while she's out of action, we’ve had a few weeks to process data and produce some preliminary results from the initial NIMPA surveys. It's great to see the data taking shape.  Over 13 days and 5 nights out on the seas, we’ve had almost 200 sightings, of which the majority are dusky and Heaviside’s dolphins, as well as plenty of African penguins! On the more unusual list, we’ve had several out of season humpback whales spotted, along with minke whale and sei whales.  The hydrophone has been doing us well, with 36% more dolphin detections made possible by surveying at night and 12% from surveying in poor weather. Considering that we try not to go out in poor weather, this is pretty good going.


This is a long term project, so we’re hoping over time that the maps will build up and we will get a good idea of where animals are, how many there are and seasonal differences in distribution.  I’m also interested in using the recordings to look at dolphin communication so we are now carefully analysing the files in details finding dusky dolphin burst pulses and whistles (so far only a handful) which may be used in communication or feeding  contexts... As always, watch this space for updates on our findings! 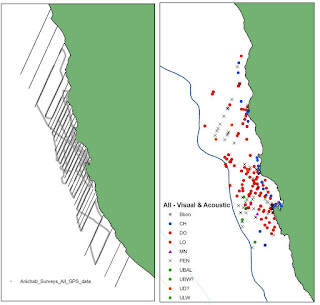 Posted by Namibian Dolphin Project at 11:02