The NDP goes to Cape Town for the AMMC


At the end of May, we traveled to Kleinbaai, South Africa for the second African Marine Mammal Colloquium. This was my first ever trip to Africa and I only I had been an intern for just under a month at this point.  I was so excited to learn more about research beyond just what we were working on in Namibia.  On the way, we stopped at the Fish River Canyon and camped at Ai Ais National Park so the trip was an amazing opportunity to see more of the beautiful Namibian countryside. It was also my first chance to see many of the region’s animals that I had never seen before. Once in South Africa, the landscape was colder and lusher than the Namibian desert, but was just as gorgeous. As we got nearer to Kleinbaai, I could tell by the signs around town that we were entering an area known for its whales. Sure enough, we stopped along the coast to sightsee a few times upon spotting whale blows amid the stunning scenery. 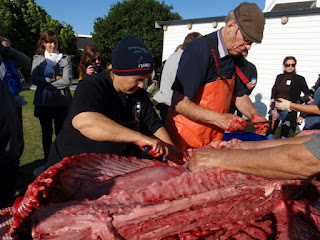 OUR COLLEAGUES, MEREDITH THORNTON & PETER BEST OF THE MRI WORKING ON THE BRYDE'S WHALE
The conference was lovely and small, and I learned a lot. I was a little nervous about being at such a small conference and being just an intern, but everyone was friendly and welcoming, and I was certainly not the only one from far away. It was nice to chat with people about the work they were doing in other places, and about what we were working on with the Namibian Dolphin Project. During the conference, there were talks throughout the morning, but in the afternoons, there were other things to do as well. One afternoon, at the end of a strandings workshop, they announced that there was a recently stranded Bryde’s whale calf. We went to take measurements and then did a full necropsy the next day. 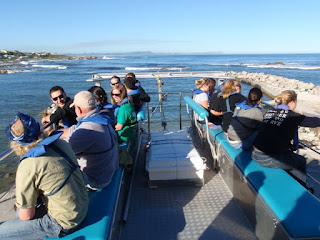 A BOAT FULL OF AMMC 'MAMMAL PEOPLE' DELEGATES HEADING OUT TO SEE SOME WHITE SHARKS, THANKS TO MARINE DYNAMICS FOR THE DAY OUT
On the last day of the conference, we got to go out on a boat to see the white sharks that Kleinbaai is famous for and that evening, we had a drumming workshop. Everyone at the conference either learned to drum or showed off their skills, before enjoying a braai. On the way back from Kleinbaai, we stopped for a few days in Cape Town, and I had time to explore one of the coolest cities I’ve ever been to. In all, it was a wonderful trip and I’m very grateful that I had the chance to go.

Posted by Namibian Dolphin Project at 10:27