On the naming of dolphins


We photograph dolphins' fins and try to identify them. If you’re reading this blog, you probably already know that. Being a work of science, the fins get assigned numbers or letters for identification. That was probably an obvious point.
Yet dolphins are adorable, lovely creatures. Who would ever think that a number could do them justice?
That is why, every so often, a dolphin gets a name.
Presumably this sometimes happens during office work, when someone is grading or matching photos of fins and goes a bit loopy after staring at fins for hours. Personally, I have yet to see this happen. What I have seen instead is a great deal of random naming in the wild, and over dinner.
Last Thursday, we were out on the boat and saw a dolphin with a relatively unmarked fin, but a white mark on his head. At first, it was "the dolphin with the white mark on its head." But we went from encounter to encounter, and it eventually reached the point where it was simply inefficient to say, "Don't photograph that, it's the dolphin with the white mark on its head again."
Instead someone said, "No, it's Kevin again."
Thus he or she was christened Kevin.
Not that field naming always works. A few days before that, we met a dolphin with an unusually large nick at the base of his or her dorsal fin, whom we called Bruce. (A debate ensued as to whether it was Bruce, Brucette, or Brucella, but that's irrelevant; most names seem to end up being masculine anyhow.) It became clear over a dinner conversation, however, that we apparently have three different dolphins with supposedly unusually large nicks at the bases of their dorsal fins; all of whom we've been calling Bruce.
It wouldn't be the first time the same name was used more than once. We have two Daves (but as they are different species, some would argue that this doesn't quite count). Despite the attempts of some to use feminine names—like the attempt to say that Bruce was Brucette, or a dinner table conversation in which several people agreed that someone ought to be named Lucy—masculine names seem to be the ones to stick. 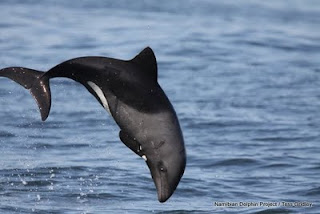 Posted by Namibian Dolphin Project at 08:26