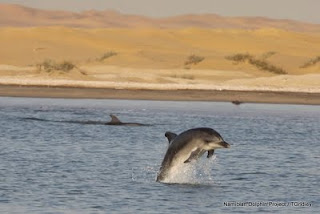 I’m now halfway through the internship living and working with people from all over the world and still feeling like there is so much to do and learn. That’s not to say I haven’t been fulfilling my goals for the month, but a month is a relatively short time to take in everything there is to see. Up to this point, the most memorable experience in the whole trip has happened in one minute; one minute of pure significance and amazement. I was out on the water where we had encountered a group of bottlenose dolphins with about 7 individuals. I had been documenting their behaviour, so I was able to really focus on everything that they were doing: every jump, every breath, every action taken above the water or next to the boat. We had been with them for about half an hour and this is when it all happened. One of the adult dolphins came up to our boat to the side I was on, and had turned on his side in such a way that he could look up at me. At first I wasn’t sure what he was doing, and that’s when Simon said “He is totally looking up at you right now”. In that instant, I knew that I was experiencing something that I had longed to be a part of since I begun aspiring to be a field biologist. The dolphin had continued to swim with us and fix his gaze for about a minute before breaking our locked eyes and dashing off to reunite with his dolphin friends where he belonged. To see these magnificent creatures in the wild as free beings and have an interaction like this one has, in a way, made the whole trip worthwhile. That is one minute of my life that I will never forget. 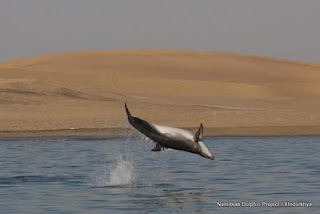 Posted by Namibian Dolphin Project at 17:56