A dead false killer whale (Pseudorca crassidens) was found by Swakopmund residents washed ashore on the morning of the 6th of August in the Mole. The animal appeared to have died very recently. The sighting was reported to the Walvis Bay strandings network and the NDP were on the scene soon after it was reported. We took a  set of standard measurements from the animal and several samples for molecular analysis and collected the skull which will go to the National Museum in Windhoek. We also looked for the the possible cause(s) of death by looking for signs of illness including tumours and parasites. The stomach was removed and the contents will be analysed in the coming weeks to assess what the animals had been eating prior to its death.
The false killer whale was male, was just over 4 meters in length and likely to have weighed around 600 kgs.  Its teeth were severely worn down which may be to be a sign of old age or that it was feeding on sharks and rays which have very rough skins. False killer whales normally live in deep offshore waters along the continental shelf edge. They are part of the oceanic dolphin family and mainly eat fish and squid.  Like ‘real’ killer whales, they occasionally prey on marine mammals as well. There is no information about the number of false killer whales in Namibian waters, but they may be threatened by fishing activity and offshore seismic exploration for oil and gas which leads to a high degree of sound pollution.
Being on one of the main holiday beaches in Namibia, we had quite an audience throughout the necropsy, including lots of small children who were all very fascinated by the inside of a whale! 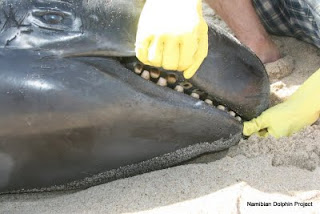 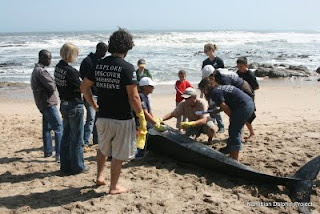 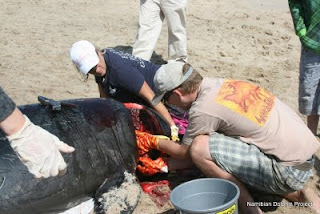 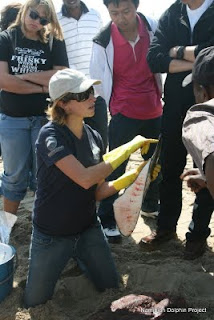 Tess taking on the PR job 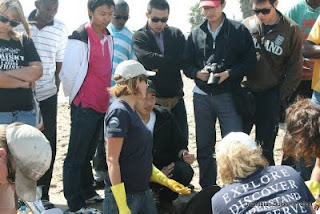 Posted by Namibian Dolphin Project at 21:22