Thursday - first sea day in Walvis Bay. I went out with Mola Mola tours (www.mola-namibia.com) on one of their commercial trips to see what they do, where they work and to start to get a feel for the sea around here. 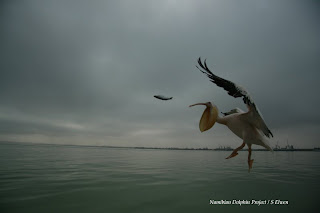 It was quite a different experience to anything I've seen before in either South Africa or the UK. There are nearly 30 boats in total working in the bay (concerns about the potential effects of this on the dolphins are one of the reasons we're running this project), and several of the other local species are very habituated to the boats.

There are a group of about 5-8 seals which are effectively trained to feed off the boats (and seem to behave remarkably well for wild animals) and the pelicans, sea gulls and some skua's will come to take fish from the hand.

We did see a small group of Heaviside's dolphins just off Pelican Point, but there is a large sulphur eruption in the bay at the moment which has caused the majority of marine life in the bay to die off or move away from the area. The local oyster farm has had an 80% die off and there are almost no fish being seen locally. This is apparently one of the largest sulphur blooms in many years.

For more pictures from this day, look at: http://picasaweb.google.com/simonelwenwork/Namibia2008 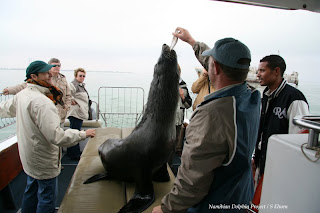 Posted by Namibian Dolphin Project at 22:07

Wonderful that you've started a blog Simon! I'm so glad to hear you're now in Namibia & will certainly need to come for a visit sometime. :-)

I look forward to reading your adventures.