Monday 26th I went on a kayak trip with Jeanne Meintjies of Eco-Marine Kayak tours. Jeanne has been running these tours since the 90's and is one of the older companies in town. Due to the size of the bay, the kayaks are driven out to the peninsula from where the paddle runs out to the tip of Pelican Point. 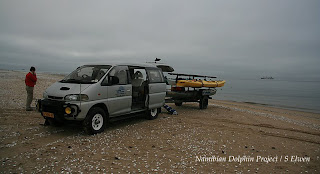 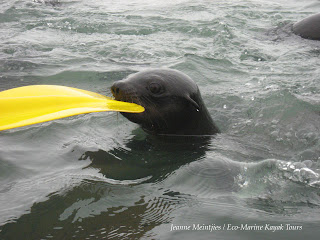 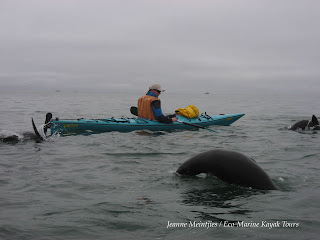 Although we saw a scattered group of Heaviside's at the point where I've seen them on the previous two outings, they weren't particularly 'friendly' towards the kayaks and I wasn't prepared to risk my camera this early in the season for a few poor quality ID shots.

In the afternoon Keith Wearne took me across the lagoon and salt pans by car to to look around, check up on the local bird populations (which Keith is involve in counting) and to look at the skeleton of a pygmy right whale which had stranded in the shallows. Someone had wanted the bones, so Niels Dreyer (Mola Mola) had put fencing around the carcass to allow it to rot clean without washing away. Unfortunately no body has looked at it since and the bones have pretty much rotted away. We did get to see some nice birds on the way there and back including some baby flamingos which are beginning to arrive from further north. 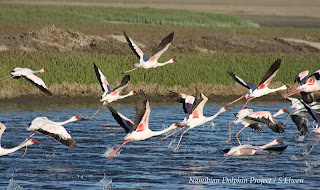 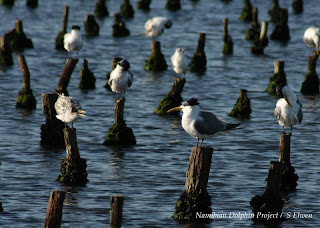 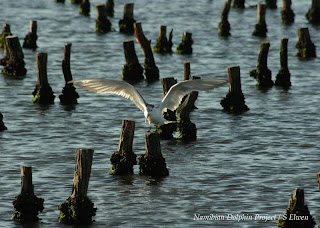 Posted by Namibian Dolphin Project at 16:59

si these photos are ace, especially the tern ones!