Sunday 25th. I went out with Mola Mola cruises again today. Being a weekend, the number of tourists and boats were considerably higher than on Friday's trip. Most of the boats here run a very similar route, clockwise around the bay stopping at the derelict Russian trawlers, the oyster farms, seal colonies, the lighthouse and then ending at the tip of Pelican Point where Heaviside's dolphins are commonly found. 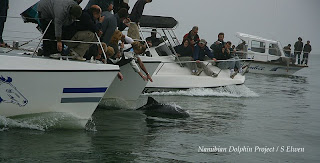 There were at least 8 - 10 boats on the water and at least 4 near us at any time throughout the trip (3-4 hours) and at the point, several boats would cluster around a group of Heaviside's dolphins if they were jumping or being boat friendly and bow-riding.

As you can see from the photograph, the density of boats around the dolphins was quite striking at times. This is likely to have some effect on the natural behavioural patterns of the animals and several clients on board the boat commented negatively on the situation.
Posted by Namibian Dolphin Project at 21:54

Blimey, I've heard of boats tipping over sideways when people see a whale but these boats look capable of forward rolling! And not a lifejacket in sight...

If boats are bunched up as you say then at least any impacts will be temporary. It's an point for discussion whether it's better to have dolphin watching boats arrive on-mass or lined up one after another for continuous exposure.