What news from Namibia? Thing have been perking up here which is great. The Heaviside's were fairly abundant at the point for a few days over the new moon period, but were difficult to find today again, although it was quite choppy out there.

Highlights of the last few days? On a long survey up to Swakopmund yesterday, we resighted the small, scarred humpback whale I mentioned in my previous post, and only a kilometer from where we saw him on the 17th! I've never known a humpback whale to stay in one place for so long. Although it is 'out of season' now and they should theoretically be feeding in the southern ocean, so it's hard to tell what is motivating them right now. Although there was a large group of birds circling it when we first saw it, we didn't see anything that could be definitively described as feeding behaviour from the whale.

After a slow start to today with a some dark, choppy weather and impossible to find Heaviside's, we managed to track down the bottlenose dolphins (thanks to the tour boat skippers). 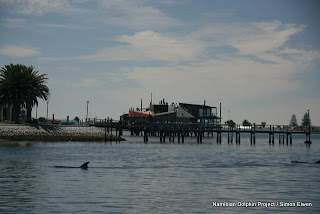 They were in the inner lagoon, where they had been seen yesterday afternoon. This is right next to the yacht club where we launch and the Raft which is a great local pub with a lovely sea view and wonderfully cheap beer (which, given the current water shortage in Walvis Bay is the cheapest thing in town to drink).

The bottlenose dolphins in Namibia come into ridiculously shallow water. We spent the whole morning sitting inside the inner lagoon in water that was only just deep enough for the boat and trying to get recordings of their whistles without dragging the hydrophone (or the boat) on the sea bed. The lagoon is a RAMSAR site so boats aren't allow to go in - but it's so shallow and full of sandbanks you couldn't even if you wanted, although the dolphins managed it. The dolphins were feeding on some of the hundreds of mullet that were schooling in the lagoon and we got some great shots of them pinning the fish against the shore using a 'pincer' manoeuvre. One or two animals would chase a school of fish along at the surface (it was so shallow there was nowhere else for them to go) and a third animal would circle around to the front. As they the dolphins met, all the fish would jump out the water (see pics). I've never seen such obvious cooperative feeding before so it was a great sighting for me and we got some good data from this group, both behavioural and acoustic. 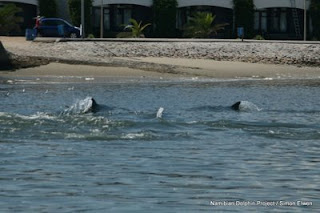 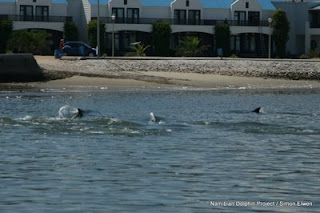 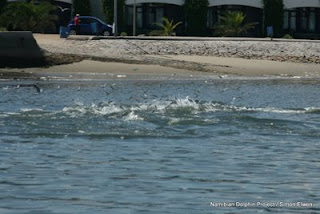 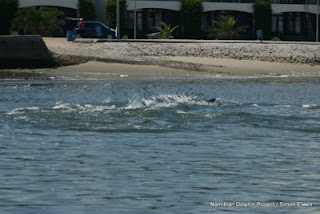 Posted by Namibian Dolphin Project at 22:59