The (unfortunate) highlight of this season so far has been our abrupt lack of funding as mentioned in the last post. So the majority of the last week has been spent in coming up with alternate plans on how to raise some capital to keep us on the water until the end of March. Some progress has been made and there is hope of some longer term funding but that will take some time to filter through and it's a long way from in the bag.

In the short term however we've been approaching local companies in the hope that one or a few of them will be interested in supporting marine research and conservation and help us out with fuel money for the rest of this season. I guess the recession isn't all bad news - petrol is half the price I'd expected it to be this year, so the bill is a lot less than it could have been!

On that note - we're having a little fundraiser event next week, Tuesday the 3rd, down at the Anchors at the Walvis Bay yacht club jetty. 18h00-19h00. Tess will be talking about dolphin communication and her PhD work, I'm going to give a little presentation on our work here and John Paterson of the Albatross Task Force will be talking about sea bird conservation in Namibia. So please come along and support local research and conservation initiatives!

In between all the fun and games of emergency fund raising, we've managed to get out to sea a few more days and collect some data - although it's been unfortunately quiet out there (as the tour boat skippers told me last year that it would be). The Heaviside's have been scarce or skittish, and when we found the bottlenose, they have been in very small groups. But we had a nice behavioural follow along the Long beach area over the weekend (they didn't do much - it's not all Blue Planet out there I'm afraid). 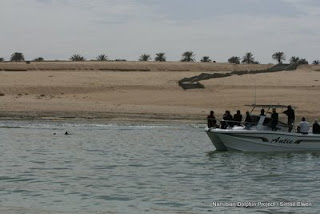 It's been making for a quite interesting (if slightly boring) comparison to the distribution patterns we observed during winter last year - most noticeably we're seeing Heaviside's in quite different places. We had a lovely encounter with a single young Heaviside's dolphin off Bird Island on Monday - we sat with the engines off for a full 40mins recording it and it just quietly circled us and checked us out for the entire time. Was a lovely change from the normal noisy sound of outboards and cries of 'it's behind you!' - usually followed by turning the boat around and calls of 'it's still behind you!'. Challenging little animals to photograph sometimes. 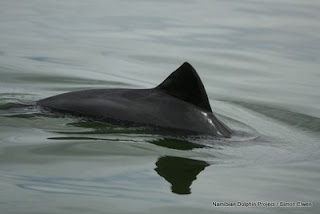 Posted by Namibian Dolphin Project at 20:39