Just say no to trash!

'Just say no to trash!': This is the first message coming from the Ocean Week that has started last Saturday. In fact, in spite of the cold and rainy morning, more than 100 Walvis Bay residents attended the Beach Cleaning Day, which was organised by the NACOMA project as the first event of the Ocean Week. In addition, there were representatives from the Army, press, the Ministry of Fishery, conservation projects (NDP, CETN) and lots of passionate school kids from elementary to high schools attending the event. It is particularly to the school childred that the message of 'Just say to no to Trash' is directed.

Under the banner of this message, Mrs. Sue Roux (CETN – Coastal Environment Trust of Namibia) welcomed all the participants in a crowded chamber at the Municipality and presented some of the terrible effects of pollution worldwide; yellow rivers, plastic seas and marine animals wrapped in nets or intoxicated by oil were some of the striking images shown. After the introductions, groups of children and adults spent their morning together cleaning the coastline of the town: from the pump station in the south to Langstrand in the north. 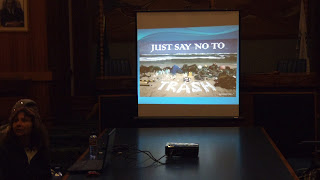 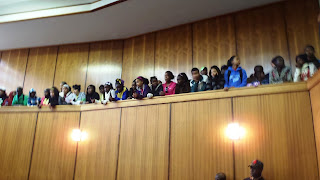 Each group was provided with gloves and recycling bags to sort glass, plastic, metal and paper. Unfortunately (or fortunately?) kilos and kilos of trash were collected: nets, clothes, cans, glass and plastic bottles, thousands of metal lids, cigarette' packs, tires, buoys, newspapers, toys, car windows, bricks, wires and much more were found along Walvis Bay beaches and lagoons. The very same areas used by jackals, flamingos and herons! Besides the amount of litter removed from the shores, one the most important goals of this event was to make as many people as possible aware that Namibian beaches are unfortunately not only made of sand and that trash has an high impact on everybody's life and on our Earth. Hopefully the kids who joined the event learnt that each one of us is responsible for his own trash, and that disposing of it in the proper way does make the difference... and in doing so, it won't be necessary to wake up early on Saturdays to clean beaches anymore! 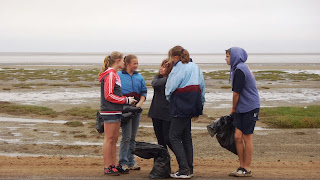 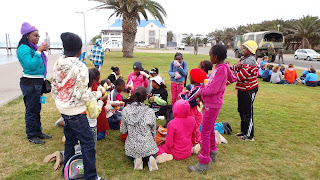 A big thanks to the NACOMA project for organising this day as part of a global initiative.
Posted by Namibian Dolphin Project at 09:17

It is good to know that some kids participated because it would really make a big difference because some most of the adults are stubborn nowadays. Perth skip hires are continuing to clean our city really well and we don’t have any problems with garbage sorting so I am glad that my city is doing fine.