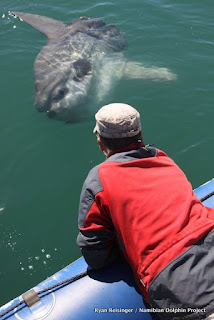 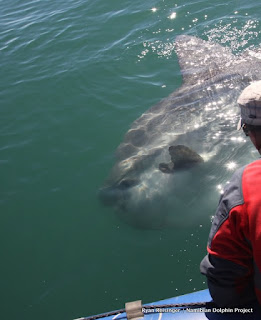 In the office we've been working on photo identification, acoustics analysis, and entering new data. The acoustics data is quite interesting to explore, as you can hear the various whistles and clicks of the dolphins in addition to seeing the representation of sounds well beyond the range of human hearing. Today we were presented with a misty morning on the Namibian coast, but decided to head out despite the lower visibility. We encountered some Heaviside's dolphins by the point but were rewarded further by a humpback whale sighting. After hanging back so the tour boats could enjoy, we followed along parallel to the two adults. To determine the most probable spot of the next surfacing, we timed the intervals of their blows as they travelled. It was truly amazing to be so close to such giant, beautiful creatures! I'd only ever seen whales from a commercial whale watching boat before, but being in such close proximity on Nanuuq was a different experience entirely! I imagine that the thrill I felt as we crested swells in pursuit of the whales must have been similar to what the early whalers experienced. Sentimentality aside, Simon managed to get a good shot at one of the whales so we got our first tissue sample of the day. At some point we managed to swap whales and found ourselves a new individual, but after getting a few photos of him, he headed North along his migratory path and we were back with our original duo. We got another tissue sample from the second whale and then called it a day.
Posted by Namibian Dolphin Project at 17:08