Tess's birthday last Friday (17th), so we decided to combine a beach survey following the spring tide with a little beach braai (barbeque) to celebrate the occasion.  Worked the poor car almost to death, apparently a full tank and 8 people on a soft beach is about the limit a Mitsubishi Turbo Diesel can deal with..

We went to Donkey Bay for beach survey today. Donkey Bay is at the south of Walvis Bay. On the way to Donkey Bay, we passed the salt banks and everyone was excited about it. We jumped of the car and had a walk along the muddy road. The pools were red because of algae and the mud around the pool had different layers of color. Then, Simon drove us all the way south to the border of Sandwich Bay. We saw four jackals, probably a big happy family, walking along the sand dunes.

Basically, the survey started from Donkey Bay till Pelican point. We travelled north and tried to find dead animals especially dolphins and whales. There were a lot of dead seals on the beach, some were freshly dead and others had only bones left. We drove to a freshly “dead” seal on the beach and wanted to check it out. As soon as we stopped the car beside it, it opened eyes and started to run away from us. We were so amazed because everyone thought it was dead. The seal looked back at us innocently like saying: “Leave me alone. I am just having a nap”.  We had a big laugh and continued the search. After a while, we discovered a dead leatherback turtle. It had been dead for a long time since only bones were left and buried in the sand. The turtle was about 160cm long and its skull was missing, but we could see its tail, legs and shell. Apart from the turtle, we also found a piece of whale’s bone nearby, which was pretty awesome. It could be a right whale or a humpback whale. After investigated the area, we headed to Pelican point.

At the Pelican point, we set a bonfire and prepared for braai on the beach. At the meanwhile, we explored a wrecked ship. The water was quite shallow but freezing cold. There were some sea anemones, which were fun to touch. It was awesome to have braai on the beach and we all enjoyed the day. 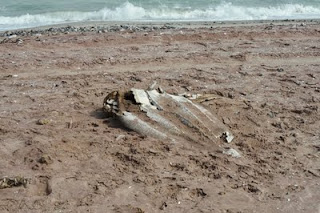 Posted by Namibian Dolphin Project at 21:24