Rescue of a rare whale 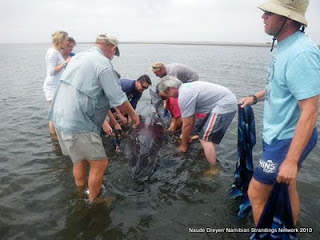 On the 6th of January, a pygmy right whale (Caperea marginata) stranded just south of the pumpstation in Walvis Bay. The whale was a 3.5m youngster. Members of the Walvis Bay Strandings Network, including John Paterson and Naude Dreyer, quickly made their way to the scene and had a easy time getting it back into the water, although the whale did at first seem very disoriented and headed straight back to the beach four times before finally swimming out into the bay. This kind of behaviour is not uncommon in stranded cetaceans, and reinforces the importance of monitoring the animal after it has been refloated!


The pygmy right whale is one of the least-known whales in the world. It is very rarely seen at sea, and is mostly known from the few stranded specimens which have been examined by scientists, post-mortem. 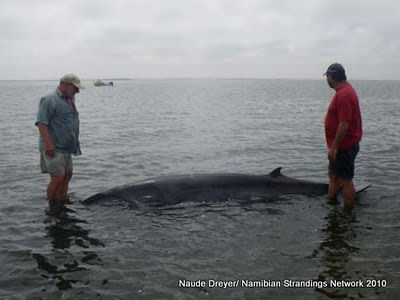 They grow up to about 6 m in length. Pygmy right whales are so-named because the shape of their head resembles that of a true right whale, but they are not closely related. Pygmy right whales are found only in temperate waters of the southern hemisphere. Sightings occur year-round in Tasmania, and seasonally along the coasts of South Australia, New Zealand, South Africa, the Falkland Islands, and some areas of Antarctica.


We're really proud of the Walvis Bay Strandings Network, for acting quickly and efficiently in this matter and with a number of other recent strandings. 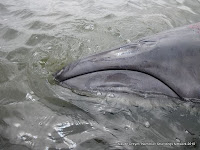 Their continued interest and voluntary efforts ensure that we can get rare creatures such as this pygmy right whale back into their natural habitat, and perhaps learn something about the in the process.
Posted by Namibian Dolphin Project at 17:26